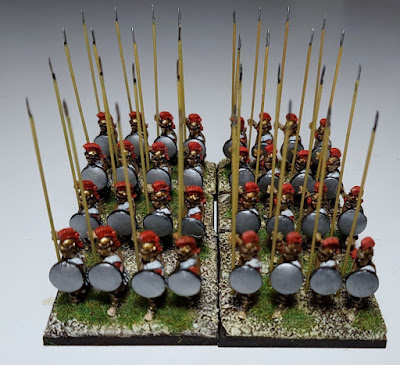 I have recently started playing with Mortem et Gloriam rules and I used the collection of my 10mm miniatures to learn the new rules. However, I noticed that 15mm is more popular and since I don't actually have a fully painted army in 10mm I was wondering if I should start one at a bit larger scale.

I must admit that 15mm models I saw at the recent event looked much nicer. I also had a chance to inspect some of them during one of the visits to Olympian Games. Hence, when I finally decided I would like to continue playing with Mortem et Gloriam I also wanted to start an army in the "proper" scale. Fortunately for me, Argyraspides from Xyston Successors range were available and I had my first models to paint. I have never painted 15mm ones before so I was very interested in checking if what I learned in painting both 28mm and 10mm miniatures would be helpful.

In this post I would like to do two things. First, I would like to share the way I painted my models. I hope it will be useful for others. And second, by showing the steps and the approach to painting and modelling I hope to receive some comments how to improve it. I am happy with the result as it is but I also want to challenge myself and keep getting better, so any feedback will be very much appreciated!

I wanted to be relatively close to the historical color scheme Seleucid soldiers should be painted in. I found it interesting to go and search for some resources. I have a few books, Osprey Publishing is always quite helpful but these days one can search internet for some ideas too. Here are two examples I found that were an inspiration for me.

I really liked the striking contrast between red clothes and white linothorax. I also liked the bronze armor and Silver Shields so I decided to go for this color scheme for my first unit. I intend to use similar colors for the rest of the army too. If I paint the shields of Phalangites in a different color the units should still look as a unified force. But they would have enough differences to be distinguished as separate Tactical Unit Groups or TuG's.

I was nicely surprised with the details of the models I bought as they don't look that nice on the official pictures. At the same time I knew I need to strike the right balance between the details and the overall look. I may spend more time on details but these may not be visible, especially at this scale and the time spent on painting them would be quite long. However, I didn't want to make the painting too simple as I hoped to achieve a nice look of the units and take advantage of the detailed sculpts.

In order to do that I thought that proper priming of the models will be required to make the details stand out a bit right from the start. Hence, after cleaning the models from mold lines (not that many!) and washing them I went for two stage undercoating. It means that I first sprayed the models with black primer and then I gently added short bursts of white primer. This way I had details outlined and defined right from the beginning. It has also this advantage that white and red colors I wanted to use would be painted on the brighter background.

I worked on 8 models at one time (mainly because there are 8 in a single pack) and I found it the right number to paint as a batch. I needed 32 in total on 8 bases but I think having them all lined up would have been too much. While painting one model at a time was not feasible at this scale either.

I noticed that sometimes white primer still got in between the details so to correct that I applied diluted black wash.

Now it was time to add basic colors. I started with painting flesh first, then moved to painting clothes in red, straps in brown and metal parts of armor, such as shin guards and helmets in bronze. I used paints from various manufacturers mainly because I wanted to use what I already have. But I think it is less important at this stage as the similar colors can be obtained from many providers.

I experimented with different washes to add a bit more depth to the different areas but eventually settled down for kind of brown/red wash and I applied it for flesh and armor areas. Once dry, I painted red clothes again with second layer to make them brighter, added gold layer on more exposed areas of the armor and painted Linothorax in white.

Basing the miniatures is a very important stage of the modelling. It can and should further enhance the overall look, either of the individual model or entire unit. As with the models themselves, I looked for an inspiration. I wanted the bases to reflect a bit the possible terrain type in which Seleucid armies would fight. I thought about Syrian plains and found something like this:

At the same time I wanted the bases to have additional use, i.e. provide the ability to line them up for units and keep them nice and tidy during the game. I found earlier that magnetized bases can be an excellent solution to that. Basically, what you need is a thin sheet of steel and magnetized bases that you put on it. I have not yet ordered a proper size but I have enough magnetized bases I have previously got from Olympian Games that were perfect for that purpose.

Next I wanted to find a good way of creating the texture of the surface and at the same time the good method of fixing the models on the bases. Fortunately, my previous experiences in creating bases came in handy. I used modelling epoxy putty I purchased from Green Stuff World to create the thin layer on the base:

And then I used their excellent Rolling Pins to create the required texture.

Because epoxy putty solidifies and dries in time, I could stick my models into the bases (with a bit of super glue beneath). While the putty dried it fixed the models to the bases nicely. Finally, I added some sand here and there.

When the bases and the sand were dry and fixed, I proceeded to painting them. I used dark brown color as a basic tone so that it created nice contrast later. After that I proceeded with drybrushing the bases with 3 or 4 different tones, going from light brown to almost white. It is quite straightforward process and one simply need to be careful to not drybrush the miniatures. Although a bit of "dust" on the shins seems to be ok! When that stage was done I also added a bit of static grass.

Next I painted the shields. Initially I wanted to try and paint some of the shield patterns but I quickly realized that I am not doing it right so for time being I decided to keep the shields plain silver with dark rim. The rim is created by painting the edge of the shield black and then adding the layer of the the same silver color, making sure that it does leave a thin line around the shield itself. Thanks to that it actually looks like a darker color. In the future I will probably try to use some transfers.

Before I primed the models I used modelling files to create a small groove in the hands in which phalangites would carry the pikes. The hands are too small for the drilling in my opinion and I got that good advise from Dean from Olympian Games. He also supplied me with the North Star 50mm pikes for that purpose.

Assuming that 15mm models are in 1/100 scale, 50mm pike would correspond to 5m long one in reality which is close enough to what is assumed to be the length in historical sources. I considered some options for making them longer but I came to the conclusion that it may not necessarily be idea worth pursuing. With 50mm single pike I can fix it at two points, one at the model's hand and the other at the bottom where the pike would touch the ground. That provides required stability.

With pikes in place the models were ready. I repeated the process for remaining models and here is the end result, with full TuG of Argyraspides (8 bases, 32 models).

I really enjoyed painting these models. It does not take that long as for 28mm scale but the effect of a unit comprised of 32 models is great. I would have probably preferred to paint the regular Phalangites first as elite units should be painted to a higher standard but I am happy with the overall effect. Even if I needed to try some things a few times before settling on one method.

I am already looking forward to painting more models in that scale! I hope you found this post useful and as mentioned at the beginning, I would be very grateful for the feedback on how to do it better next time!

Thanks for reading!
Posted by Swordmaster at 19:57