I have played quite a few games recently and I was more focused on the global campaign but after listening to the podcast I started thinking about the future of Kings of War again. There were some thought provoking ideas in the podcast. Initially I considered short feedback about these but the more I thought about the more it was obvious I may need a bit more space. Hence, I decided it may be a good option to write a post blog instead. :)
As a player I obviously want the game to grow. I don't have knowledge to even discuss any possible ideas how to make it happen. But I can provide feedback based on what I like about the game as it is and hopefully that can be of some value for Mantic too.

Kings of War - the past 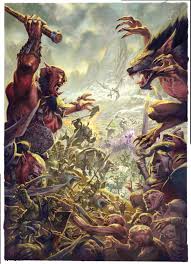 I think it is a good idea to start with a simple explanation why I play Kings of War. There are so many different games out there that a person who wants to dwell into a realm of miniatures, painting toy soldiers and then aligning the armies for battle is simply spoiled for choice.

I was interested in a game that would allow me to use my collection of models to fight battles in fantasy world with rank and file units.

I also wanted to play a game that was relatively straightforward, i.e. the set of rules should be relatively simple to learn. The reason was that I simply wanted to focus on the game itself.  I didn't want to spend time in searching for the rules in various rule books. Or trying to find a solution where two sources were providing conflicting explanations.

It was also important that the game of my choice would be known to enough other players so that I would not have trouble finding an opponent, be it locally or online.

In 2015 Mantic was about to release 2nd edition of Kings of War and  I decided to give it a go. After first 2 games I was not yet sure if I want to play it but I liked the fact I could learn the rules fast, use the models I have and focus on developing successful tactics to win my games.

Kings of War - the present

After two years I can comfortably say I made the right choice and found the game that suits me perfectly. I am still learning how to use my army to the fullest potential but I enjoy my game a lot already. Playing games and writing battle report motivated me to paint more models from the collection I have.

I made the decision to completely switch to multi-basing and I really enjoy that aspect of modelling. I think it makes units and armies look fantastic, even if the unit base itself is relatively simple. But it also opens some awesome opportunities for creating small dioramas or even entire display boards too.

In other words, I seem to be in that perfect situation where I think I have the army I don't want to tweak anymore (even if I haven't much anyway), I want to keep painting new models to replace the old units that need to retire after all these years of service, play games and write report.

Kings of War - the future

I may be lucky to be in the situation where I have more opportunities to play than I can find time for. There are enough local players to organize regular gaming nights in the local stores. The events attract enough participants, people keep bringing new armies or expand existing ones etc. However, maintaining the interest of the existing players and attracting the attention of the new ones requires some effort anyway.

Rob and Mark discussed the way players can engage in making the game more popular. I believe I can contribute to that effort a bit too, so let me elaborate on that part now.

1. Being active in social media.

It goes without saying that thanks to the internet one can reach to a lot of people. I have my personal experience with forums and this blog that show it is a very good option for an individual player to support the game.

My initial aim with the blog was to have an archive for battle reports. But I realized I can add a bit from myself to make Kings of War more popular by advertising these reports on forums. That is also why I set the twitter and facebook accounts.

I was also happy to be accepted by much more popular bloggers like Natfka or Creative Twilight for the blog exchange. I was very nicely surprised by the fact that the article I wrote about converting and painting Drakon Riders was considered worthy to be published by GoldenD6, Volomir and BrokenPaintbrush.

Last but not least I was greatly honored to be the guest on Counter Charge podcast itself!

The main thing these examples show is that there are so many ways of engaging with people all over the world to make Kings of War more popular and that it is what every player can do. You can inspire others, exchange the ideas and simply let other people know that Kings of War is a great game and is worth trying.

I will do my best to continue contributing this way. In addition, there was an advertisement from Mantic itself and I sent an email to Robert Burman that I would be very happy to contribute my battle reports. Hopefully he will find them worthy publishing :)

I am very lucky that there are great and experienced tournament organizers as well as shop owners here in Canberra. Matt and Tas are doing a fantastic job organizing the local events at ThreeD6 while Chris is putting a lot of effort to make regular gaming nights at Jolts a thing to attend.

My little bit is to try and attend as many events as possible to increase the number of participants, to meet new players and do my best to give them as best experience as I can while playing Kings of War. I simply noticed that while tournaments are competitive events they also attract people who may have little opportunities to play otherwise. If I can give them a good and entertaining game then there is a chance they will continue coming on as regulars.

It is probably even more likely to happen with campaigns. That's why I did my best to participate in the Edge of Abyss one and I am very happy to hear there are plans to organize a local campaign. Such events allow for even more casual games with a bit less time constraint.

As we play in the local stores it also generates more traffic and I hope that also adds a bit for their owners. I believe that playing in their venues more often will show that Kings of War players are active and that it is a good idea to keep Mantic products in stock. 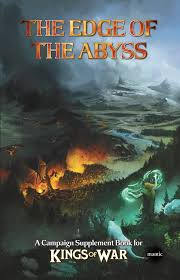 Rob and Mark were discussing the options Mantic could consider to grow Kings of War further. Personally, I don't think I have enough understanding of the business to discuss if it is better to support 20+ armies or is it more feasible to focus on fewer factions, for example.

I definitely agree that regular release of new models is important to maintain the interest of the existing players and to attract new ones. Even if I don't plan to buy the new models I want Mantic to succeed in producing new and high quality armies.

It is, of course, difficult to make everyone perfectly happy, some would say impossible. However, it seems to me that as the game of Kings of War contains different aspects that are attractive to different players it may still be worthy considering how to address them.

It depends on how many resources Mantic can allocate to each. However, I can say that as a player who already has a collection of models, I can definitely support them by buying new supplements rather than new units. Hence, I am very happy to know there is a new Source Book coming and that Clash of Kings 2018 is going to be released too.

I would be even more happy if there are annual campaign books, especially if they provided opportunities for games that are different to what one can play by following either the rulebook or Clash of Kings scenarios.

Here is one thing I hope Mantic can consider. I would like to support my local stores by buying Mantic books from them. Last year, however, one would need to wait really long to be able to do so. It was much easier (although significantly more expensive) to order the same product online. I hope it can be addressed somehow so that local stores can place the order earlier and receive the products at the same time as everyone else in the world. This way players Down Under would not feel excluded and local stores would be able to support Kings of War.

I will probably write a 2017 summary in December but I can already say it really feels good to be involved in Kings of War and I am very enthusiastic about upcoming releases. I think the time from the release of 2nd edition was great, Kings of War grew and I can't wait to see what 2018 can bring!