It was really great to get back to playing Kings of War and even more so to attend such a fantastic tournament.

Three D6 crew as always organized the venue in a perfect way so many thanks to them for being such a great host. Matt is doing stellar job as an organizer too and I personally feel very lucky to be in Canberra and be able to attend his tournaments.

It was fantastic to see players from interstates to attend the local event and boost the numbers so that for the very first time we reached the maximum number of players for the tournament!

And of course many thanks to all my opponents, Matt, Daniel, Kate and Ken for fantastic games! I hope I will have a chance to play again all of you and it was mainly thanks to you that I enjoyed the day so much.
I have some observations after the tournament too which I would like to share.

The rules were very almost identical to the very popular Clash of Kings supplement. What was different for me was that the hills were Height 2 and that often was overlooked by me. Because of that I made some different decisions but I cannot tell if higher hills impacted the games in a significant way. I definitely need to use that better in my games if I happen to play with such set.

I didn't have a chance to play against Romans either, as one of the players brought the historical army too.

We also included new scenarios but as these were determined randomly before each game I had a chance to play only one of them. Occupy is an interesting twist to the core set of the scenarios but fortunately for me it didn't require much of a different approach than Pillage, for example. I just had to remember that some of the tokes are worth more than others and had to adapt the plan accordingly.

I must say I am getting used to the fact that the selection of armies represented at KoW events is really diverse. This is simply great as even if one plays against the army from the same faction it is often completely different in composition. Variety is a spice of life after all!

Here is the table with the final results showing the armies represented and their respective final scores. 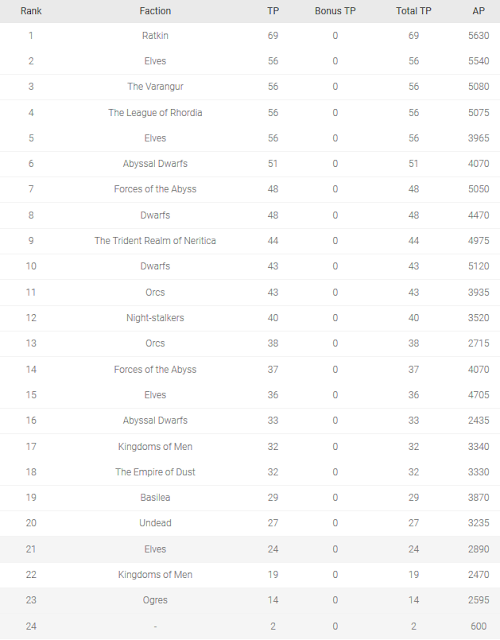 Evil Ratkin dominated the field but it was very interesting to see that the armies from 2nd till 5th place had the same amount of tournament points and it came down to pure kills to determine who gets better placement!

It actually made me thinking more about my own approach to the game which I am going to discuss a bit more below.

If you are interested in the results in more details, the lists used or even scores in each round and who played against who, then follow this link:  The Vally of Kings 3.1 - Results

I ended up on 5th position with 3 wins and 1 draw. I was very happy with that achievement as it is really big for me that I didn't lose a game. In particular, after such a long break.

I made a lot of mistakes which I expected would have happened and as you could see, I didn't have a steady level of performance. Especially Games 1 and 4 were good examples where some of my decisions resulted in casualties.

However, I am very happy with the army I play at the moment and I really enjoy using it. I will keep practicing with it simply because I can better implement lessons from my mistakes in the future games. And focus on painting in the meantime :)

Interestingly, all of the players who had the same amount of points as me lost one game. This got me thinking about the scoring and how to improve my tactics in order to perform even better.

In general, my approach is always to keep in mind the scenario objectives and I really like Kings of War because it often allows you to win the game despite losing more units. However, it is clear that with the scoring system from Clash of Kings this alone is not enough.

In my understanding there are three factors that contribute to the overall success from the point of view of the scoring:

1. Meeting the requirements for objectives - that is the first and most important goal. If I could achieve it then it means the result starts from 15:5 in my favor. Winning the game based on the scenario objective is always a priority even if alone it does not guarantee the success. For example, in this event winning all games 15:5 would have not been enough to secure 1st place.

2. Routing as much as the opponent - that condition seems to me to be the second in importance. it is due to the fact that the difference in points routed by each player will further modify the result. It may appear that more often the player who wins also routs more of the enemy units. But my games are good examples of the opposite. For instance, I won game 4 but lost many more units and the end result was modified in Ken's favor.

3. Routing as many units as possible - that may seem to be the same as point 2 but it is not. In the case 2 if your opponent does not kill many of your own units you may not need to get into risky melee if you secure the objectives. You still win, the score is not modified against you. However, when it becomes to tie breaker, the fact that you didn't rout many enemy units will play against you. As my results shows it was still better when you lost one game than when you were not defeated provided that your victories were by a significant margin.

That means that I need to refine my tactics in order to not only win the objective but at least minimize the losses in comparison to those of my opponent. In addition, I also need to kill more enemy units.

It may be a bit more difficult to do since my small units are easier to rout and I often need to sacrifice some in order to get into good positions. However, if the exchange goes into my favor, i.e. I can still get rid of more expensive units, I should be fine.

I think it is possible to do because when I looked at my games in this event I lost more points not because it was necessary but because I made some mistakes and had to use desperate measures not to lose at all. It also does not mean I need to be more cautious in my approach. Very often quite the contrary. If I am decisive I can achieve the goals faster and with less casualties.

I guess the way to do it then is to keep practicing, be more precise with positioning and be more decisive in executing the plan.

Hopefully my future games will show some progress in that department :)

Thanks for reading!
Posted by Swordmaster at 22:23

Email ThisBlogThis!Share to TwitterShare to FacebookShare to Pinterest
Labels: Kings of War, The Valley of Kings 3.1, Tournaments