Battle 3 - Battle for the Pass - Daemons of Chaos

It was a rule book scenario with no modifications. I was wondering what kind of army I am going to face this time and I soon found out I am to fight against Daemons of Khorne. What is more, my opponent was a frequent tournament participant and current No. 2 in Oz, Nick Legrand. :)

I haven't had a chance to play against Nick before but his record speaks for itself. I knew I am facing a very good player and that it is going to be a tough challenge. I think both our armies had advantages and disadvantages in terms of the scenario. Daemons could nicely protect their flanks, for example, not allowing my forces to envelop their units.

As I have mentioned before, Nick had a themed, all Khorne army with Mr. Blood Thirster himself as an army general.


A very compact army that meant trouble. You see, whenever you face a force with relatively low model and/or units count that is not good at all. Here, I had 3 very powerful units which are also very fast and capable of destroying any of my units in one go on their own. The infantry is still dangerous but I could handle bloodletters either with shooting or in combats if I could make them happen on my terms. The cannon is always a problem as its flexibility means it can participate in the game at any time and it is not that easy to take out.

I decided to shoot at bloodletters so that I could charge them and destroy them in later turns. I wanted to delay and divert bloodcrushers as long as possible. If opportunity presents itself, probably in the form of magic, I wanted to use it against either BloodThirster or Soulgrinder. In both cases some shooting can be useful. Unfortunately Nick rolled 2+ armor save for his general who also had +1 to hit ability. Ah well, at least searing doom could be useful here :)

Nick won the roll off and his Daemons moved forward without delay!

Daemons of Chaos - Turn 1
Blood Thirster ordered his minions forward, staying behind a little bit, despite his new and shiny brass armor (Edit: Nick rolled 2+ armor save on gifts). The skullcannon opened fire and reduced eagle claw to splinters. However, Dark Prince decided to interfere and while it killed no less than 4 dragon princes it also claimed Soul Grinder! Not quite a start Khorne followers would like.

With the enemy a little too far away there is not much Loremaster can do so he simply slows down the Blood Thirster a little. Valiant eagle blocks the blood crushers while all the shooters open fire at the bigger unit of blood letters. More than half of the horde goes down! (Edit: Nick could not make a single save (I think!) here!)


On the South Daemons move towards elven lines while small regiment of bloodletters and the cannon move back. It was clear that it is just the silence before the storm.


Elven cavalry charges as one from the front and flank and thin line of blood letters is not able to stop them. The last of the lesser daemons turns into ashes when the magic holding it in the real world vanishes.

The rest of the arm maneuvers to better positions. Brass armor proves to be too tough to penetrate and Blood Thirster suffers only a single wound despite all the arrows directed at it.

Larry the Loremaster decided to step in and show his warriors how it is done. He first tries to drain the soul out of the huge body of the greater daemon but soon finds out that what he learned at his daemonology lectures was true. Daemons have no soul. Not a problem! He then chooses a favorite spell of his friend Archie the Archmage. But in the middle of reciting the formula he gets a little confused. Was it soaring doom he wanted to cast. Or searing doom? Damn, these spells have so silly names and he also remembered that even the slightest change in the pronunciation can have devastating effects. Hm which one was it? Well, soaring doom sounds more poetic, it must be this one. Or maybe not ...

Edit: Yeap, another nice cascade this time claiming 6 lions too. I am not sure if it was even that spell but if it was I simply failed to roll well and to wound anyway :)

Blood Thirster does not wait any longer and charges the archers. Their champion valiantly sacrifices himself but despite that and desperate shouts from Bob the BSB, the Archers turn and flee only to be caught in pursuit by the greater daemon.

High Elves focus on the Northern flank in order to eliminate blood letters and skull cannon. The cannon is too resilient to shooting. White Lions and Swordmasters keep chasing bloodletters. At the same time another eagle blocks blood crushers.

Blood Thirster flies back and prepares for another attack. Skull cannon shots at dragon princes but their armor is strong. Blood letters keep moving backwards.

Bob and his retinue swift reform but again daemonic armor is too thick for their arrows. Dragon Princes charge the skull cannon but daemonic engine manages to hold to the real world dimension by a very narrow margin. Now daemons are ready to hit back! 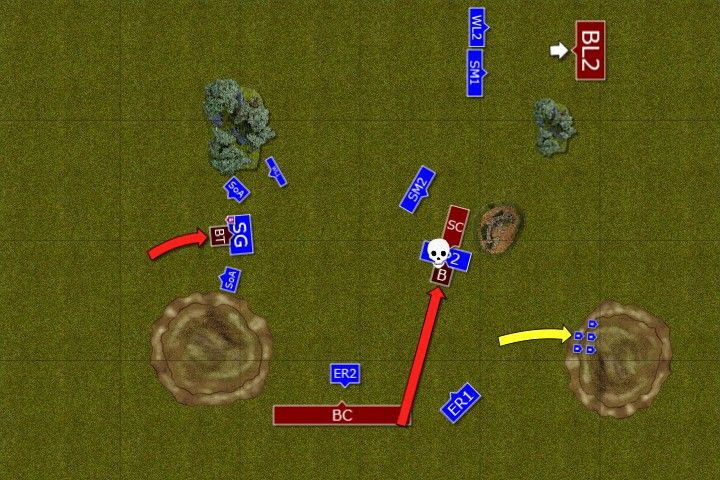 Blood Thirster charges in and yet another champion lies down his life for the greater good. Daemonic BSB charges out of his unit and the elven knights are destroyed!

Blood Thirster once again deflects all the hits going at it and then kills elven bsb as wells as stomps to death many elves. Sisters flee from combat but sea guard holds for a little longer.

Elsewhere Swordmasters charge skull cannon with the help of reavers and finally destroy the infernal war machine. On the North elven units charge but only white lions make it. That is not good for elves as in the combat one on one blood letters manage to hold easily. (Edit: I of course had to fail 5+ roll for Swordmasters to get in :))

Blood Thirster destroys yet another unit and roars in triumph. BSB charges interfering reavers and kill them too. Blood letters and White Lions exchange some blows. This time daemons have upper hand but Lions hold.

In desperation Swordmasters try to kill enemy bsb but the creature from hell kills them all instead. Only a single White Lion holds the line against blood letters up North.

With their leaders dead and army losing coherence High Elves are forced to withdraw.

Congratulations to Nick for well deserved victory! He didn't give up when things looked grim by the end of turn 2 and ruthlessly exploited my numerous mistakes that cost me the game. Well done!  =D>

It was unlucky to lose Larry again and to fail a few important rolls, like the failed re-rollable break test for archers, 5+ charge or rally for Shadow Warriors. But it was due to my numerous mistakes I lost the game. I must admit I am very embarrassed to make them.  :oops:

1. Not blocking bsb with reavers. It was not guaranteed that dragon Princes would hold as they lost their strength bonus but at least I had a chance. Instead, I lost the unit which was a little more expensive than the cannon.

2. Wrong formation on Lions and Swordmasters chasing blood letters. If I at least formed lions into a cube I would have had  a chance to charge turn 6 with Swordmasters. It would also limit attacks directed at Lions. Instead I blocked myself and was lucky not to lose that unit too!

3. Not protecting bsb! I could move him out of the unit (although I was concerned that he might suffer from the reign of chaos). Or drink potion of strength in the subsequent turn, challenge the daemon and keep the unit steadfast. I would probably lose my bsb anyway but I would have denied t-stomps that devastated the unit.

4. I would also benefit from deploying further as daemons had to come at me while I could buy myself one more turn without combat against Blood Thrister.

As a result I lost a game that started so well.  :(

Ah well, lessons learned! And this time it is a good example how not to play!

Thanks for reading!
Posted by Swordmaster at 22:02