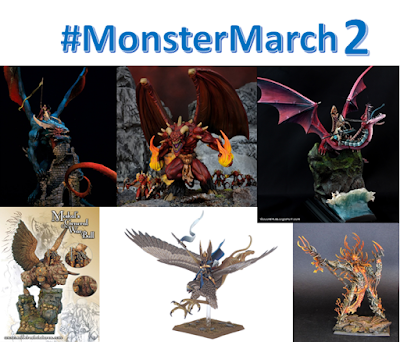 Azazel has just accomplished his Squandry challenge with Nurgle models and you can check them on his blog:

His Monster March project is a secret at the moment but I am sure he will update us on the progress soon!

Blazmo has a very intriguing project where he creates conversions for the 40k army. However, his army can be defined as ... Rats in Space! And for the Monster March challenge he is to convert and paint Stormfiends that are to be used as Kastellan Robots in his games!


Chris is one of my regular opponents in the game of Kings of War and he is famous for collecting, painting and playing with really old school models for his Undead Army. I highly recommend to check his blog for different type of Undead related articles. Here is the link:

I can't wait to see what kind of Monster he is going to paint this time!


CJ is bringing another quite iconic model from the Grim Darkness of the Far Future, i.e. Imperial Knight! I have seen these models before and I must say they look fantastic so I am sure CJ will have a lot of fun painting it!


Cylde is participating second year in a row! Thanks a lot for coming back, I really appreciate that! Cylde is an amazing painter and you absolutely have to check his blog. In fact, he has already posted his first post about Monster March project, Baneblade! We can all agree the model is a beast!


Caladaris pledge two models for this challenge! He also posts on The Creative Twilight website and he decided to paint Eldar Wraithseer as well as a Phoenix from Kingdom Death. You should absolutely check his most recent post where he explains a lot about his projects but also adds some really nice story line!


Dan is a very frequent visitor to my blog, often commenting on the battle reports. But he is also a fantastic painter (I have seen his army on some events photos!) so I am very happy he is also joining the challenge. He decided to go for Halfling Iron Beast for his League of Rhordia army. This model needs to be converted from others as there is no official kit for it yet. Hence, I am also very curious about his idea for the conversion. Welcome on board, Dan!

Darth has just received new models from one the Kickstarters he backed up. And he has a fantastic model, perfect for the Monster March! It is Tianlong, a dragon! 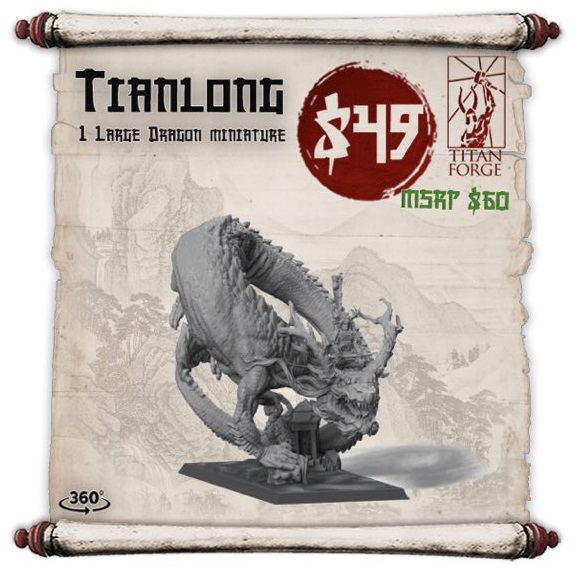 Can't wait to see it painted!

Ed is also coming back for more after the first Monster March a year ago! He is bringing Ceratus Knight Castigator and he has already posted about this challenge on his blog!

Welcome back, Ed and thanks for positing about Monster March too!

Julian is another Kings of War player I have a great pleasure to play against sometimes. He is an extraordinary painter and you can check one of his fantastic project where he created entire Night Stalkers army in this forum topic:

He decided to paint a Giant for this challenge, can't wait to see some WiP pictures!


Ken "Chaaarge" is a very active player of Kings of War and he is currently busy painting models for his new KoW army - Orcs! He already embarked on the journey and keeps painting Giants and War Drums!

Matt has just learned about Monster March when I updated info on FB page and promptly decided to join with a great model for Kings of War army, Archfiend! Welcome on board Matt! 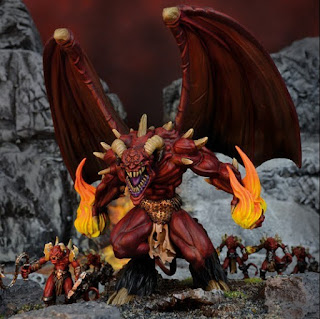 
Nathan is going to use Monster March challenge as an opportunity to assemble and paint a model to represent a Greater Earth Elemental for his Dwarf army for Kings of War. He is using a model for Rune Elemental.

As you can see, Nathan had a brilliant idea how to highlight the Dwarven theme for his army by weapons swap. I think it is a fantastic way of doing so and can't wait to see the model painted!

Neal is using the opportunity to finish painting his Tree Herder! I am glad to see that participants also bring the unfinished models because sometimes getting back to such projects is more difficult than to start a new one!

Kiwi also decided to join the challenge but I think he must be already busy assembling and painting his model! Please, let us know what are you working on so that I can update your entry :)

This year I decided to join too! I also bring the model I have started painting before. It is High Elf Prince on a Griffon from Island of Blood set. I am using him as Drakon Lord for my Kings of War army. I have put basic colors long time ago and have not progressed since. My aim is to paint the Prince and depending on how much time I have left, I will try to improve the painting on the griffon. 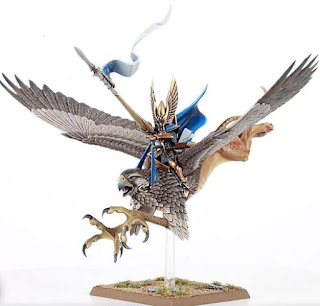 I would also like to mention a fantastic initiative of Ken who supports Monster March not only as a participant but also as an admin of Kings of War Australia FB Page. He asked the members to post the pictures of their monstrous models to further inspire the participants and you should absolutely follow the link to see some great monsters!

It is really great to see so many very interesting and diverse projects people are going to work on during Monsters March challenge. Thank you very much for participating, it is awesome for a host to be able to showcase your work.

In the meantime, keep your fantastic projects going and I will see you in the next week when I am going to post all of your updates on your respective models!

Cheers!
Posted by Swordmaster at 17:58