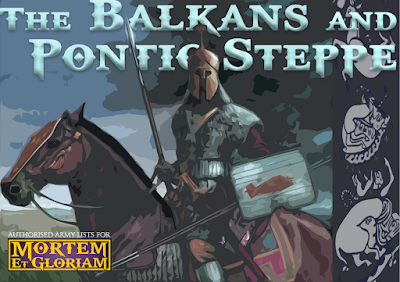 In the next game I played against another of my regular opponents, Paul. He decided to bring his Bosporan army with Sarmatian allies for a re-match. There were some interesting changes in his army list, even if it didn't change much visually in comparison to our last encounter.

In general, as before, Paul's army was mainly cavalry with a few units of infantry. However, this time Paul increased the number of bases per unit in some cases and took better quality troops in another. I was obviously curious how would that change the way I would need to respond to this, technically already known, threat.

Here are the details of the army Paul brought for this game: 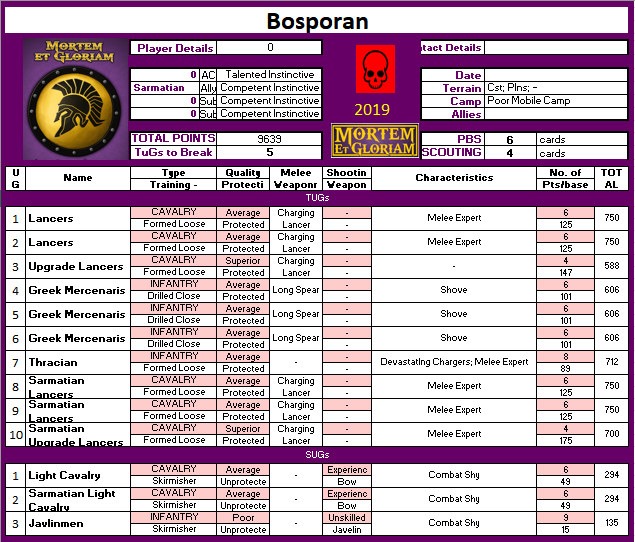 Fewer TuG's means lower break point but at the same time it would be more difficult to do so. I am not sure which is preferable. Five units of infantry are very good in their own right and have a chance to stand up to the Phalanx for some time.

The advantage in cavalry numbers is obvious so I expected that Paul may threaten the advance with infantry but would not want to commit too early. At the same time he may prefer to use his cavalry to quickly outflank my army. If he can coordinate the attacks well I would be in big trouble for sure.

The initial plan would thus be the opposite to his. Delay his cavalry and get into melee with infantry as quickly as possible. 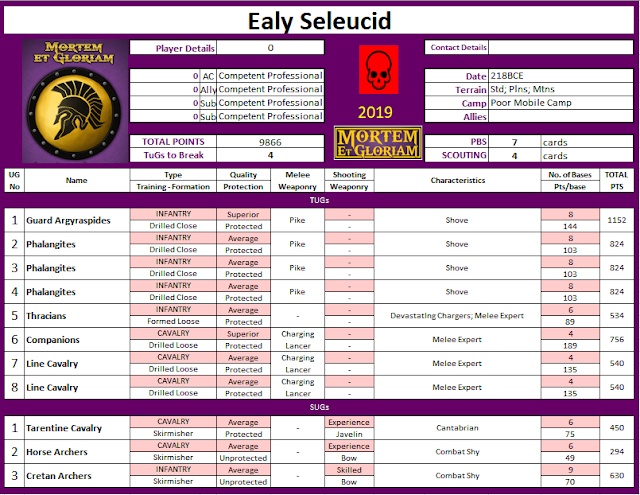 Paul was invading force in this game which gave him the opportunity to move cavalry first. He also did well in the pre-battle phase in terms of choosing the battle field. We ended up having quite empty one, definitely good news for cavalry as I was not able to use terrain to guard the flanks of the Phalanx that well.

I do not think we managed to outscout each other much this time.

Fortunately we had secure flank so I deployed the units close to it, including the camp. I decided to split phalangites into two groups as usual but I also deployed them further away. This was to allow at least some of them to engage with the infantry.

However, Paul's Samratian allies used the empty left flank to deploy there and I decided not to advance too quickly towards Greek mercenaries. My skirmishing cavalry was also in a wrong spot but I could use them to slow down the infantry instead and try and create break through on the right flank.

Surprisingly, Bosporans sent their Allies and Mercenaries first, keeping their main force away from the Phanalgites. On the other hand, it made perfect sense to send allies and mercenaries to engage the enemy and look for some opening to outflank dreaded phalanx.

Seleucids move the phalanx on the right flank as planned but on the left only Silver Shields moved to intercept advancing Sarmatians. It was to buy time for the rest of the Seleucid cavalry to arrive and help protecting this area.

Suddenly, the units on both sides of the battle field charged at each other. On the right flank Cretan Archers were not able to avoid enemy horsemen but they in turn galloped too far and hit advancing Phalangites.

The Greek Mercenaries pressed forward but Silver Shields decided to pin down the Sarmatian Lancers. However, the second unit moved passed them to open the space for clever outflanking manoeuvre. Silver Shields were now in grave danger and it was up to Seleucid cavalry and remaining Phalangite unit to protect their flanks and to try and help them.

Impetus attack on the right flank saw one of the Boporan cavalry units broken by the Seleucid Phalangites. Another TuG of Phalanx was fighting well in the middle, holding off two enemy infantry units at the same time.

Silver Shields were doing well against one unit but the superior lancers attacking from the flank kept them under pressure.

Seleucid Cavalry fought really hard to break their enemy to break through and help Silver Shields but the stubborn Sarmatians refused to yield.

Silver Shields managed to defeat one of the enemies already so they were turning now towards the flanking unit. If they could hold just a bit longer! Unfortunately, the cost was to high and even elite Phalangites had to withdraw to re-group after heavy losses. The good thing was that they also forced their enemies to do the same, especially when Companions routed third Sarmatian unit.

However, the battle was finished without full conclusion as both armies fought hard until dark and survivors withdrew in good order to fight another day.

Many thanks to Paul for another great game!

I must say I was very impressed by the manoeuvre where he sent one of his Lancers unit to hold against my cavalry, only to allow another TuG to get into perfect flanking position. I was also surprised I was able to hold with Silver Shields to rout two of the units anyway! I attribute to luck as I was clearly outsmarted here.

Perhaps I should have expected this type of deployment and perhaps I should have sent the Phalangites on the right flank mainly, keeping whole cavalry in the left flank. In this way I would be able to avoid that huge gap in the middle where I had only some units to stop Paul's cavalry. Fortunately for me one unit got trapped by the pikes, the other had to withdraw and regroup and thirds managed to catch only horse archers.

Thanks for reading!
Posted by Swordmaster at 20:11