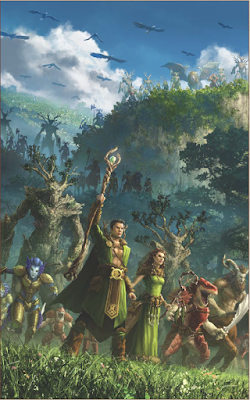 Although everyone is building new army lists for the 3rd Edition of Kings of War, I decided to continue with my 2nd edition battle reports.

I decided to do so because of a few reasons. First, I would like to make sure to thank my opponents for great games and the best way I can do it is by writing the battle report! Second, the longer I wait to write the up, the more difficult it would be to recall the details and I simply want to finish them to focus on the new.

However, I also wanted to feature the battle reports from the very first Australian Universal Battle tournament too! This game was my last preparation before we started. I also think that it was a great way of saying farewell to a fantastic game of 2nd edition of Kings of War!

It is probably not a surprise that I played this game against Jeff, by far my most frequent opponent! If I can make something work against him, it simply means I am on the right track.

For this game Jeff chose Forces of Nature army. Not the very first time when Jeff used this faction against me but one can always be sure that Jeff's army list is never exactly the same as last time. Here are the details of his army at 2250 points:


I am sure there were some additional upgrades such as Inspiring Talisman and spells but I cannot recall what was where in particular. My apologies.

In general, I have already learned about Jeff's style some time ago and this army is a good example of his approach to army list building. He has a number of highly reliable regiments, that can take a lot of damage and keep on going. While not particularly fast, they can advance with a purpose and will not be slowed down.

The mandatory nimble characters, be it flying or not, form a support line but thanks to their manoeuvrability, they can easily move around the units and charge unsuspecting enemies.

The army also has a solid shooting support in the form of Beast of Nature that are also very good in melee. Very versatile monsters, can always keep the opponent guessing as to what they would do next.

In general, the army has total of 15 elements and all of them are scoring! The total unit strength for this army is 23.

Even without checking the scenario I knew I need to win the flanks in order to envelope the Salamanders, otherwise I have no unit with staying power that can hold against them for long. I also noticed that with the Banner of Griffin on such a big unit, many elements of the army would benefit from higher nerve. Even more reason to spread and try to draw the units away from Salamanders.

My shooting would be effective against Centaurs but I had a feeling Jeff would not allow me to shoot at them easily. I really needed to win the flanks fast!

This army has thus 16 elements, 15 scoring units and total Unit Strength of 21. I have 1 more unit, same number of scoring units and a bit lower army unit strength. However, both armies are very different from each other so it was interesting to see who can force the opponent to play his own game.


We got Push as a scenario and we had 2 tokens per side. I decided to spread the tokens and give them to both Wardens as I thought they had the best chance to sneak in between enemy units to the opposite half.

I was concerned with all the lightning bolts and the fact the centre was relatively open so I deployed units either in the terrain, out of sight or simply out of range in turn 1. However, I conceded the central token in doing so. It was very risky as I would need to get the Salamanders in the end if I hoped to win the game.

I placed majority of the forces on the right flank but even so I needed proper double pincer manoeuvre to prevail in this game.


The Forces of Nature advanced in a tight formation, aiming for the centre of the battle field. Only the Centaurs on the right flank moved back a bit to lure the Elven fast forces in.

Beasts of Nature acted as mobile artillery and Palace Guard was their first target. Although elite Elven warriors held their ground, they did suffer significant damage.


Elves executed their plan right from the start and focused on the flanks. The chariots also advanced, simply to threaten the Warden who has already snatched the treasure from the very centre of the battle field.


Forces of Nature slowed down the advance and formed a curved battle line to avoid early outflanking. Centaurs on the right moved back again, once again remaining out of charge range of Elven Knights and Drakon Riders.


Elves decided to attack early to gain advantage on the flanks and block the Salamanders in the centre. However, only the Elementals on the right were defeated. Shamblers on the left held their ground.


Unfortunately for Elves, Forces of Nature had enough highly manoeuvrable units of their own to navigate around the enemies that attempted to block them.

Elves suffered some losses but more importantly, they were pinned down in a a few one-on-one combats that favoured their enemies.


Elves threw in their remaining units but some of them were still blocked while those who made contact, were not able to inflict sufficient amount of damage to break their opponents.


Forces of Nature pushed really hard, even Salamanders made it to the fight and the result was devastating for Elves. Not only they lost 5 units in a matter of seconds but a few remaining ones got wavered too.

Surviving Elven commanders quickly sounded the retreat to try and save a few units from complete annihilation.

Many thanks to Jeff for a great game and congratulations on such a spectacular victory! It is not often when I throw in the towel but somehow it happens only against Jeff :)

Well, that obviously did not go well and ended faster than I hoped for. However, there are always valuable lessons to learn, even in such cases of a total defeat.

First, I came to the conclusion it was a mistake to concede the centre. Perhaps if I used the Shamblers in the middle as a mobile obstacle, that would have helped a bit to contain the enemies. I also wonder about advancing in the cover. It significantly slowed down my Palace Guard.

I did not coordinate the attacks well either. While the units on the flanks charged, the infantry was still getting into positions and it took only one regiment of Elementals to tie down three of my own units.

I was not decisive enough on the right flank and allowed Centaurs to move away from the charge range twice. I think I should have moved Drakons forward and while staying away from the Warden, I should have the ability to attack Centaurs early on. Or even move into charge range of the Warden with Drakon Riders and Lord so that I would force the attack to gain terrain.

Jeff did a great job in containing my initial attack and with a mobile heroes and beasts, he was still able to move them to good positions while allowing Salamanders to attack through the centre.

Something I had to think about a lot prior to the Universal Battle. However, I also think it is worth analysing for 3rd edition games as well, where I may need to attack frontally more often due to less manoeuvrable Drakon Riders.

I hope you still enjoyed the battle report, even though it was a bit one sided!

Thanks for reading!
Posted by Swordmaster at 21:42