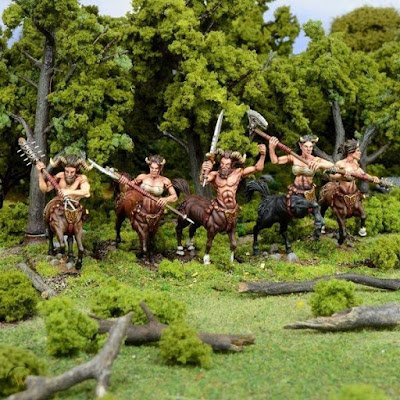 Welcome to the first battle report from the very first Australian Universal Battle tournament and the last event I took part in that was played with 2nd Edition Kings of War rules! Talk about saying farewell to 2nd Edition with a bang! :)

Many thanks to Michael who organised this event for a few die hard UB and KoW enthusiasts! The tournament had 5 rounds and had initially 12 participants. 10 of us finished it. We used Black Jack scoring system and Michael was announcing the scenario for each round just after the previous one was finished.

If you would like to check the results already and/or are interested in the details of the army lists participants used, please follow the link to Michael's blog:

We played at 2250 points which to me was the perfect size for the games. I was really happy to participate, especially that in 2019 I did not attend many tournaments.

In the first round I drew Yan who chose to use his Forces of Nature army. It was quite a different approach to the army list composition than Jeff's so it really felt like I was playing against a completely different force. Even if it was the same faction. Here are the details:


A very interesting army with a lot of variety in it. I really like it even though playing against such a versatile force is always a challenge. You can't really predict what it is going to do. It has good ranged attacks capabilities provided by Naiads and with Lightning Bolts, Curse, Drain Life and especially powerful fire-breath attack from Agnih-Bhanu.

It has speed to attack and to intercept with three regiments of Centaurs and Flying units that can hit hard on their own. And it has staying power thanks to Forest Shamblers. Which are also quite fast considering Vanguard and formation/brew of haste that make them Speed 7.

It means that I would need to be careful and do not let them attack me first turn!

As usual, I check the three measurable parameters to assess the opposing army. This fore has the total of 14 elements, 13 of them scoring and a combined unit strength 21. As you will see later, it is almost identical with my own army.

In general, I thought I would need to use my longer range shooting to eliminate some Centaurs and faster melee experts to overwhelm the opponents. But to do that I would also need to be able to isolate such targets. Interesting game was shaping up for sure!

This army has thus 16 elements, 15 scoring units and total Unit Strength of 21. As I have mentioned earlier, it is almost identical as Yan's army. I have just 2 more elements total but with the same combined unit strength.


In the first round we had Invade as scenario. It is relatively simple one in terms of objectives but not necessarily easy one to achieve. The opposing army could easily form the wall of Shamblers, vanguard into my territory and it would be hard to shift them with frontal attacks.

Because of that I didn't really want to meet the threat head on and started deploying with two groups instead. I thought that if I could block for a while with one, on the right and outflank with the other, on the left, I should have better chance. I would also be able to use greater speed of my fliers to create bigger threat.

If in addition I would force the enemy to slow down and create fights in the enemy territory, perhaps I would have a chance to win the scenario.


Elves begun their fast outflanking manoeuvres on both sides of the battle field. At the same time, the shooters also started chipping away some damage here and there. With Windborne cavalry pushing one of the wardens further away from his Shamblers.


The Forces of Nature sent some units to threaten elven advance on the right flank and at the same time kept the distance elsewhere. They also returned fire but with fewer long range attacks, this was not yet as dangerous.


Elves continued manoeuvring and kept shooting at the same targets. It brought some successes as one regiment of the enemy Forest Shamblers and Forest Wardens were eliminated.


Forces of Nature fought back of course and Elves lost one of their units as well. Moreover, the risky manoeuvring left some openings as well and Forest Shamblers were animated to attack. Fortunately for Elves, it has not resulted in casualties. Yet!


Elves decided to carry the fight deep into enemy territory instead. On the left flank the units attack mainly to intercept the foe and use it to get to the better outflanking positions.

On the right the Windborne cavalry did great by wavering one of the Centaurs regiments but it was balanced out by the fact the second unit stubbornly refused to yield even after huge damage dealt by the Elven knights.


What looked like a great opening on the left flank turned out to be a disaster as Elven Drakon Riders were intercepted and promptly routed by the warlike Centaurs. When Elves army lost second unit and a regiment of Palace Guard, things started looking quite bad for the Outcasts.


Despite considerable losses, Elves could still mount a successful counter attack. On the left flank the shooters used the opening to eliminate Centaurs who in their battle fury galloped too far from their leaders.

On the opposite flank the other two regiments of Centaurs were also caught off guard and dispersed. When Palace Guard with Forest Shamblers attacked and routed Greater Air Elemental as well, it looked like Elves gained a bit of an advantage in speed over their enemies.


Although the remaining units around centre of the Forces of Nature initial deployment zone started to withdraw, the fight was far from over.

Storm Wind was badly damaged and managed to hold the ground but at the cost of being wavered. Other elements pressed forward through the forest towards Elven territory.


Both armies were quite exhausted by now but neither could afford stop fighting just yet. Elves attacked withdrawing Naiads and routed them while another salvo from Windborne claimed Forest Shamblers regiment.


Forces of Nature rushed towards Elven side of the battle field and only single Warden attempted to rout badly wounded Elven knights. However, elite heavy cavalry refused to do so!


Elves consolidated their positions and successfully invaded enemy territory. Last act was to force the enemy Forest Warden to withdraw from the battle field.


Although Elves managed to invade their territory, Forces of Nature had the last word in this battle. Unfortunately, the last shots fired did not result in any Elven units being routed.

Both armies disengaged and survivors withdrew, Elves prevailed thanks to hard won victory!

Many thanks to Yan for a great game! It was fantastic battle with a lot of action and quite a few turning points.

I thought I am on the ropes already when I missed that opening I left for Forest Shamblers to attack the Drakons on the right. Even more so when next turn I lost three units, including both regiments of my fliers!

The good thing is that during the game I was still thinking about new options and fortunately for me there were good opportunities to fight back.

Windborne cavalry definitely played a crucial role, either wavering the enemies or even blasting them off the battle field completely. But the other shooters did well too, especially when they could combine their efforts. I really like this aspect of the army where the units can still chase damaged enemies and potentially rout units on their own.

I am also glad I could continue with the plan despite the losses and when I simply decided to carry on to the enemy territory. Even if some of the enemies did the same to me and I had little to stop them. However, diverting the units to fight there would have been a mistake, I think. Not only I needed one turn to regroup, I would also fight on my own half.

All in all it was a great game and I am glad I could play against Yan again!