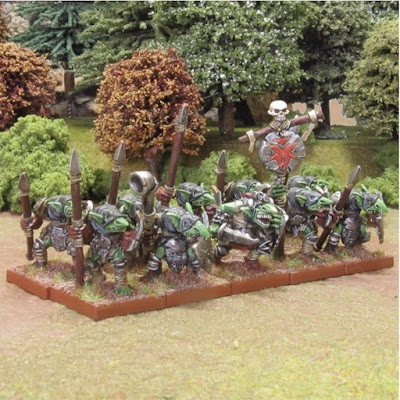 However, this time, apart from Jeff's nightmarish army of Night Stalkers I knew I would always find difficult to win against, I thought Tony's Goblins were at least equally difficult to defeat.

I am often envious that Goblins seem to have it all. Massive amount of units, good shooting, variety of troops, plenty of heroes of various types etc.

Tony's army was not an exception and here are the details of the force he brought to the tournament:


This army has its all! Tough units that can take the charge and hit back such as Trolls and Giants, cheap but not so easy to rout units such as Rabble and in particular, the Goons! Plenty of shooting in the form of Trombones and Lightnings, flexible mounted heroes, able to intercept fliers etc.

This army is has significantly higher number of elements (20) but fewer scoring units (11) and similar combined unit strength (23). That creates a very interesting dynamics because I should probably focus on the scoring units. However, other elements such as Trombones or wizards with lightnings can easily rout my units on their own so I cannot simply ignore them.

In this game I needed to be both careful and decisive meaning that I would need to position the units carefully and commit them when there would be less chance to lose them in counter attacks. Easier said than done but I needed to do some damage before suffering casualties to make up for the difference in numbers. And keep enough units alive to fulfil the scenario objectives.

If possible, I wanted to use my own shooting to eliminate such units as Rabble but if not, then a few wounds here and there at other elements before inevitable melee may be a good idea too. I must admit that before this game I didn't have very detailed plan, simply because the enemy has such a flexible and unpredictable force.

In this round the scenario was Push and we had 2 tokens each. I decided to spread them among two different units (you will see that on the next diagram), to improve my chances to get something to the other side of the battle field.

I assumed that my chances, as often, lied in greater mobility and manoeuvrability of the army. However, with more units the Goblins had, it would be more difficult to outflank them. Because of that I planned to do it in two waves, first faster elements and Forest Shamblers and then follow up with Palace Guard mainly.

To make it work, however, I needed something in the centre too. And that is why I placed my Chariots (Regiment and Heroes) there. They could shoot to distract the enemy but had enough of speed to threaten flank attacks. Storm Wind was there mainly because it looked like a good corridor for them to approach and help either flank or centre. Having shooters in the middle would also help to annoy any unit willing to grab the middle token.

I knew it would have been very difficult regardless, as the Trombones on the left had possibility to kill my units quickly, while the tough battle line of Goons and Trolls was not easy to overwhelm, especially with frontal attacks.

Elves advanced boldly but careful not to get into shooting range of the deadly Trombones and using cover whenever possible. At the same time, the Charioteers opened fire at Trolls while Windborne cavalry pushed back one of the Giants on the left.

Goblins advanced, slowly in the centre but more boldly on the left flank. Only the Goblin King, feeling unusually brave for his kind, charged Drakon Riders all by his own.

At the same time, Goblin Wizards called upon evil lightnings to strike at their enemies.

Seeing the opportunity to destroy one of the Goblin war engines before it fires, Drakon Lord on the left attacked first and completed his mission. At the same time a few more units followed. While Drakon Riders and Forest Shamblers charged to block the enemies, Storm Wind cavalry charged through the woods to destroy one of the groups of Rabble.

The Charioteers kept shooting at the Trolls while Forest Shamblers and Drakons attacked on the right flank as well. Goblin King was brave indeed and got wavered only, despite combined attacks of Drakon Riders and nearby Lord.

The unit of the Goblin army happily counter attacked but it was only on the centre right that it was done with a success. On the left Giant and all the shooters were not able to rout their chosen targets, only wavering them in the process. A bit of disappointment for sure.

Elves continued their attacks and achieved some more successes. On the left and right Drakon Riders attacked the Giants and inflicted considerable damage.

Storm Wind cavalry found a way to manoeuvre around the units and destroyed yet another Trombone. While the shooting from Forest Warden and Drakon Lord on the right flank saw the brave Gobling King finally defeated.

Drakon Riders paid the ultimate price as both Giants routed Elven flying cavalry. Interestingly, the shooting was still not efficient enough and another Drakon Lord, badly wounded, was still in the game!

Despite the losses, Elves had to continue the fight and managed to hit even harder this time! They topple both Giants, so the sacrifice of the Drakon Riders was not for nothing, and inflicted some significant damage across the board!

Despite that the Goblin army was still very dangerous and it showed when Elves lost three more units to counter attacks. Would that be the stop of the Elven offensive?

The fight was now quite desperate as Elves were running out of time and units. Nevertheless they kept on fighting. Drakon Lord and remaining Hero on Chariot teamed up to get rid of one of the Trolls groups.

Forest Shamblers used the opportunity to flank the Goons and inflicted substantial damage as well.

Goblins clearly had no luck in this battle as another round of shooting was not able to do even a single point of damage to the Drakon Lord. The melee was similarly disappointing, especially for Goons who were not able to rout the Palac Guard.

In the final charge Elves managed to rout the Goons and in doing so they claimed 2 more tokens! Other attacks saw almost every target wavered so that Goblins were quite literally robbed of the opportunity to strike back.

With no ability to get into melee, Goblins decided to shoot at the Drakon Rider and this time they finally got him!

However, with no chance to reclaim the treasures, Goblins decided to withdraw.

I am definitely very happy with the result and I tried to analyse the game from the point of view of what contributed to the success. Especially that I was not sure I would be able to put up a decent fight, let alone to win the game.

I think that one of the reasons was that I was able to spot a few opportunities. For example, the charge against Trombone with the Drakon Lord was important to limit the firepower but also to stop the advance of the enemy units on the left flank. The same with the gamble when I decided to charge with the Storm Wind against the Rabble and then noticed they can rout another Trombone.

Stopping the Giants was also important because they are very hard to stop once navigate their way to the flanks. That's why I decided to attack with Darkons and follow up with the second line as planned.

I was very pleased with my shooting as I was able to chip away a few wounds here and there, keep pushing Trolls back a few times and had the tools to finish off the wounded units while my elements were still mobile. In particular Drakon Lord with the Diadem.

I was surprised a bit that Tony did not move Trolls forward in a more aggressive way. I understand he may have tried to avoid outflanking but thanks to that my fragile shooting centre was able to contribute more to the game. Also with good charges of the Chariots that blocked potential attacks against my left where Palace Guard was carrying the tokens.

Thanks for reading!
Posted by Swordmaster at 18:09