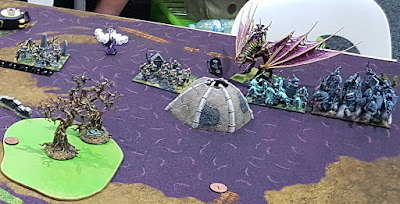 
It looked to me as an elite version of Undead army, with fewer units but much better protected (pretty much entire army had defence 5+ or 6+). Some of them, such as Soul Reaver cavalry and infantry, can hit really hard and can easily rout any unit of my own in a single round of melee.

It is a fast army too, with four elements that can fly and two cavalry regiments. Fortunately, only the Kings can fly at speed 10, so I thought I may have a bit of advantage in speed. It also has 11 units and 9 scoring elements, so I hoped to place 1 or 2 units in a better spot during the deployment.

In fact, such elite army may face a challenge to cover entire width of the battle field and either end up being spread too much or need to focus only on some areas. It was my second possible advantage to exploit.

I obviously needed some good positioning to be able to execute multiple charges. Any round where I fail to defeat the enemy in one go, I faced retaliation and most likely, I would lose a unit to counter-charge.

In this game we played Plunder as the scenario. I wanted to avoid having both tokens worth 2 points being next to each other and fortunately that was what happened. In this way I could use the fact I had a few more units to attempt to grab and control three out of five tokens, with at least one worth 2 points.

I wanted to use the fact that I had some shooting while Andrew's army did not have long range attacks to the advantage. Because of that I deployed all the shooters in the centre that was more open. Andrew deployed his army in two groups on both flanks. So my shooters could manoeuvre with a bit more freedom and perhaps collect the middle token too.

I decided to focus on the left flank and delay the right one. I expected some tough fights on the left but if I could move Shamblers to block the enemy from getting the tokens there and then use my speed and higher number of units to inflict some casualties, perhaps that would allow me to control the desired number of tokens by the end of the game.

Elves advanced across the battle field, with units on the left moving a bit faster towards the treasures. Those in the middle of the formation opened fire at Revenants in the open, inflicting some damage.

Wights and Wraiths charged Forest Shamblers but this attack was surprisingly unsuccessful. At the same time, the Undead forces led by the King himself advanced on the opposing flank.

Elven forced on the left flank used the opportunity and eliminated the biggest threat there, the horde of Wights. It was possible thanks to combined attack of Drakon Lord, Shamblers and Palace Guard. At this stage, Drakon Riders and Stormwind performed covering attacks to engage Revenent cavalry and Wraiths. For the same reason, second group of Shamblers advanced towards Soul Reavers to block them from joining the fight.

On the opposite flank Drakon Riders took a gamble and flew over enemy forces to land behind their lines. Would Necromancer be able to summon enough of his dark magics to animate nearby Revenants and intercept daring Drakon Riders?

Undead units followed the orders of their masters and attacked again. While Revenant Cavalry, Wraiths and Soul Reavers charged their adversaries, Morgoth drained life out from the Forest Shamblers.

His apprentice on the other side of the battle field was not as successful as he did not surge Revenants far enough to catch the Drakon Riders.

Elven units attacked their enemies on the left again. Drakon Riders were still locked in combat with enemy cavalry, also thanks to the support of Morgoth, who kept resurrecting the fallen warriors.

Wraiths were finally defeated, while Forest Schamblers and Palace Guard occupied Soul Reavers. unfortunately for Elves, despite the damage inflicted, they were not yet able to rout the enemy.

In the meantime, Silverbreeze cavalry and the Archmage managed to finish off the Revenants and save Drakon Riders from the immediate danger.

Once again, Morgoth used his unholy powers to destroy second group of Forest Shamblers and at the same time fix the damage done to Revenenats by the Drakon Riders. Soul Reavers used that opportunity and defeated Palace Guard too.

The King decided it is time to attack and charged Silverbreeze cavalry covering the Archers who have just collected one of the treasures. Fortunately for Elves, the King failed to defeat the light cavalry and was now in grave danger himself!

In order to help Drakon Riders on the left, Palace Guard charged Morgoth. Although they inflict some damage, they were not able to capture the evil necromancer.

Fortunately, Stormwind cavalry managed to rout Soul Reavers while combined attack of Drakon Riders and Lord was powerful enough to defeat the King himself!

Losing two powerful units was a blow but undead warriors felt nothing and cared nothing. They kept responding to the orders of the necromancers as if never happened. This time, they were ordered to assume defensive positions and protect some of the treasures.

Elves knew that in order to carry the day they need to continue the attack. Drakon Riders on the left still were not able to defeat the enemy cavalry but Palace Guard was coming to help.

The second regiment of Drakon Riders attacked Soul Reaver cavalry to allow other units to prepare second wave of the attacks. Unfortunately, the shooting was still not efficient enough to harm the Revenants.


Until now Elves were in possession of majority of the treasures but then Morgoth cast his evil spells again. First, he drained life from many of Palace Guard warriors and their companions who survived were wavering. He then fixed damage done to to Revenants again and this time the cavalry defeated the Drakon Riders. Suddenly, Elves were in a very vulnerable position there.

Elves did not have much time to try and recover from the unexpected turn of events. It seemed that their best bet was to try and wrestle the treasures from the other enemies. To this end, Stormwind attacked Soul Reavers to eliminate this target, while Silverbreeze kept shooting at the enemy. But while Elven Knights defeated their foes, Revenants were still standing and Wraiths did not yield either.


Unfortunately for Elves, Palace Guard was not able to hold the ground against the attack of Revenant cavalry and it was now the Undead army that was in the possession of the treasure.

What is more, the regiment of Revenants attacked Silverbreeze cavalry and avoided Elven Knights too!


In order to have last chance to win this battle, Elves had to defeat Wraiths and Revenants. While Wraiths fell down to the attacks of Drakon Riders, Revenants stood their ground against desperate attack of Silverbreeze.

It was clear Undead army was victorious, it was now the question about margin of the victory.


In the final act of a bloody battle, Revenant Cavalry charged through the forest and attacked Elven Archers. They managed to hold their ground however. Despite that, Undead gained strategic victory and carried away majority of the magical artefacts Elves hoped to recover.

Many thanks to Andrew for a great game and congratulations for well deserved victory! Although I managed to collect majority of the treasures first and kept them for the most of the battle, he kept his eyes on the prize and snatched it away by the end of the game! Well done indeed!

I am still very happy with the result of this game and even more so with how it flowed, despite some obvious mistakes on my part. It was good to see that once again, my units, if co-operate well, can defeat powerful enemies. And while it came at a cost, the victory was within my grasp!

I was very impressed by Morgoth and his ability to inflict damage while helping the army. It was thanks to him that Revenant cavalry kept fighting on and eventually defeated the Drakon Riders. Timing was also perfect because the Palace Guard nearby was wavered and unable to attack either.

I took some risks this game and this time they paid off. In particular with Forest Shamblers and Drakon Riders. Although with the latter I did forget about Surge for that one moment! Luckily, Revenants were not surged far enough and I could use that to the advantage.

Looking back and considering the options, I think it was a mistake to move Palace Guard to fight with Revenant cavalry. Simply because main role was to protect the treasure. I should have moved them away from the forest and ignore Morgoth. In this way this regiment would be too far from Revenants for Drain Life to help them. Or would force Morgoth to use it on Drakons instead.

Alternatively, I could drop the token in turn 4, pull back Drakons and charge Revenants with Palace Guard. With more attacks and fresh unit with higher nerve, I could keep the enemy in the fight for longer. While Archers would be there in time to pick the treasure.

Another mistake was in reforming Stormwind after defeating Soul Reavers. I did not pivot them correctly and Revenants escaped by attacking Silverbreeze. This meant I was not able to use the Knights to defeat the infantry holding the token.

Or perhaps I should have attacked Revenants with Stormwind directly in turn 6 and block Soul Reavers instead?

In any case it was a fantastic game against a fantastic opponent! I really hope we can have another chance to play against each other in the future.

Please, let me know what do you think about the armies, deployments and the battle itself. Is there anything you would like me to improve in the battle report itself?

I hope you enjoyed this one and thanks for reading!
Posted by Swordmaster at 20:14