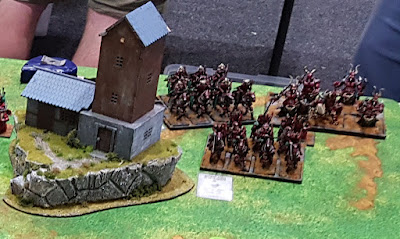 
This is a fast and hard hitting army, with many units able to charge and rout any of my unit in a single turn of melee. Especially Molochs but also Abyssal Horsemen, especially thanks to the upgrades that pretty much allowed them to ignore the terrain.

Fast Archfiend, Tortured Souls and Gargoyles were dangerous on their own against more fragile elements of my army. Devastating if attacking from the flank and good at intercepting any of my own units.

The army has also some ranged attacks that can be quite annoying, as I learned in my previous games.

I was thus looking at the potential advantages the fact I had three more units could give me. I also thought I may have a bit of more shooting to try and rout such units as Gargoyles if left in the open. My concern was that with the upgrades taken, Abyssal Horsemen would not be hindered by the terrain and I did not have many units to out-charge them. And those that could, were not punching strong enough in the frontal attack to give me a chance to rout them.

My initial plan was thus to be very careful how to advance and always support units with each other for counter attacks.

We got Raze as a scenario in the second round. I happened to be the first to start placing the objective tokens. And I begun with those on the left. Jonathon responded with those on the right so we ended up with majority of our tokens on opposite flanks.

As I did not intend to fight for all of the objectives, I decided to to focus on centre and left while delaying on the right. Even if my army deployment was relatively even across the board.

This plan was reinforced as soon as I noticed that Jonathon deployed his cavalry on the right flank. In general, it would allow him to get to his objective in force but there was that narrow corridor in his path. I wanted to use it to slow him down. If I was successful, I should have some time to tackle Molochs in the middle, as they seemed a bit isolated.

If that worked, I should be able to control three objectives and that would allow me to gain minor advantage to win the scenario. Let's see if the plan worked!

Elves moved first, hoping to seize the initiative. The enemy forces seemed to be a bit dispersed so Elves advanced boldly through the centre and cautiously on the flanks. Initial shooting was mainly aimed at the Warlock but even Stormwind cavalry was not able to hit the target many times.

Forces of the Abyss advanced on the Elven right flank with Molochs leading the way. Warlocks returned the favour and aimed the fire at Silverbreeze. Their Firebolts were more deadly and Elves lost one unit early in the battle.

Elves continued the advance on the left. The Drakon Lord used the forest to hide from Gargoyles and tempt Tortured Souls to attack. However, the Archmage made it easier for him with a few well placed Lightning Bolts that sent the enemy back to the Abyss.

It seemed that the Forces of the Abyss were a bit shy and waited for the cavalry to finally traverse the narrow path on the Elven right flank. But the cavalry did not move at full speed yet, giving Elves some more time to plan their moves.

The Outcasts decided to act swiftly, sensing that there is a good opportunity to gain an advantage. They attacked on three directions simultaneously. Drakon Riders on the left intercepted Gargoyles and made sure this flank is secure. While Stormwind in the centre and Forest Shamblers on the right attacked Molochs to buy more time for the rest of the army to prepare second wave of the attacks.


Molochs did not another invitation to counter-charge their enemies. But surprisingly, Forest Shamblers managed to avoid many blows and even held their ground!

Even the mighty Archfiend, after choosing Archers as seemingly the weakest link in the Elven army, was not able to rout stubborn Elves!

Elves used the opportunity and avenged their fallen companions who valiantly sacrificed themselves. Stormwind cavalry paired with Palace Guard charging down the hill to attack Molochs. Despite the fact it was a frontal attack, the impact was strong enough to rout the enemy on the charge.

At the same time, second regiment of Palace Guard attacked Archfiend but this time the damage was not sufficient yet to kill the beast.

Last but not least, Forest Shamblers kept holding off Molochs that in turn blocked both regiments of Abyssal Horsemen from joining the fight.

Forces of the Abyss made another attempt to break through Forest Shamblers and this time it worked. Unfortunately, the Archfiend only wavered brave Elven Archers and got stuck, exposing flank for more Elven attacks.

Elves carried on with their attacks, using the momentum gained. First, Drakon Riders regiment helped Palace Guard in the centre to overwhelm the Archfiend and defeated the beast!

At long last Molochs defeat their enemy and Abyssal Horsemen can move forward. Even Larvae dragged down Elven Drakon Riders to the ground. But Elves had reinforcements in place!

The battle was entering the final and critical stage so Elven units rushed towards the objectives. Forest Shamblers managed to defeat Gargoyles and claimed first objective. Nearby Palace Guard established perimeter around second. While Archers and Drakon Lord occupied the centre.

That allowed Stormwind cavalry and Drakon Riders to defeat Succubi Larvae and prepare to face the final threat - enemy cavalry.

With no enemy in charge range, the Abyssals manoeuvred to face Elven fast troops. Warlocks attempted to shoot down some of the Elven warriors but this time they were ineffective.

Forces of the Abyss did not want to give up just yet, so Elves charged for the last time to secure their control over the objectives.

Drakon Riders attacked Warlock and defeated it, Drakon Lord landed nearby to contest the objective, while Stormwind attempted to rout Abyssal Horsemen. Unfortunately, hindered charge against well armoured enemy was not as efficient as usual and Elven Knights were locked in combat.

It was clear that Elves held firm control over majority of the objectives. So the Forces of the Abyss focused on collecting Elven souls now. Stormwind cavalry was not able to hold the ground against two enemies at once. But thanks to them Abyssals were not able to secure another objective and the army of evil withdrew defeated.

Many thanks for Jonathon for a great game! In the end, even with the delayed attack on the right flank, we both suffered similar damage to the armies. And it was only thanks to the fact I managed to hold on to more objectives that gave me the victory - just!

I am, obviously happy to win this game, because in my previous two battles against Forces of the Abyss I lost badly. It is good to know I have the hitting power to overwhelm units such as Archfiend or Molochs. And I am glad I saw the opportunities to catch them off guard.

The fact that Forest Shamblers delayed the units on the right helped enormously. It allowed me to send the majority of the army to the centre and win against the units there. What is more, I had enough elements to control three objectives. These units were not directly in danger thanks to the sacrifice of Shamblers and Drakon Lord. The Warlocks could have eliminated the Archers, as they were damaged after a fight with the Archfiend. But fortunately, I had a spare unit of Palace Guard to control the objective anyway.

I still wonder how to defeat such an army if Jonathon decided to deploy and advance on the wider front. With both cavalry units able to navigate terrain better, he could put me under quite a pressure. Perhaps forcing attacks against Horsemen and then counter attacking with Molochs.

Perhaps we will have a chance to find out next time!

I hope you enjoyed the report! As always, I am very curious about your impressions and any comments abut the battle, the armies or the report.

Thanks for reading!
Posted by Swordmaster at 21:49