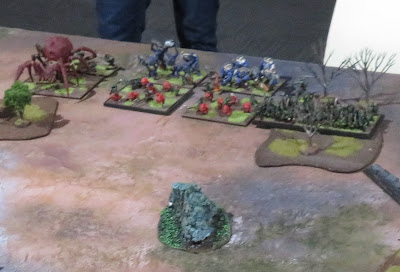 I was also curious how would I do against Goblins. I spotted Matthew's army in the meantime and it did look quite intimidating, with quite a number of units and a few hordes too.

When I play against Goblins I have to assume they will outnumber my army and that they will have higher unit strength. So it is always a challenge to play against this faction as one can put a lot of effort in order to rout some units while there is still more to come.

Here are the details of the army Matthew brought for the event:

There are only 14 elements in this force, with 10 scoring units. However, the combined Unit Strength is 21.


The army has a very good melee potential, thanks to Trolls but also thanks to the Mincer and Mawbeast packs. In addition, it has a wide selection of ranged attacks that allow it to take care of the faster enemy units.

It was definitely a challenge for me to play against such an army. I thought I would need to use terrain a lot to avoid or minimise the effect of shooting. And to be able to attack chosen targets with my own units still in good shape.

My army for reference:

This time we played Control. I actually like this scenario as it often allows me more space for manoeuvres around the flanks. The opponents focus on moving towards the centre and that sometimes helps in outflanking of the enemy army.

I can't afford the war of attrition in the centre anyway. However, I had to be very careful because Goblins have more shooting. Ranged attacks are often a good counter to outflanking, especially with a bit fragile units like mine.

Because of that I decided to use the terrain to shield them from the initial salvos. It led to the deployment with two separate groups. The one on the right was faster and potentially hitting harder. It's role was to clear out the Sniffs and distract the Spitters. If I could get to that unit fast, I hoped to occupy it in melee so that it does not shoot at anything.

The group on the left was where I tried to focus my shooting (with an exception of Drakon Lord DL1). I had an advantage of longer range here so I wanted to use that to harm or even (if lucky) to rout a unit or two.

This group had more elements as well so that I had greater flexibility in how to respond to the enemy movements. I knew that I need to overwhelm the right flank fast and bring the units towards the left to help in containing Goblin's advance. If I could achieve that and co-ordinate the attacks well, I hoped to rout some hordes in particular. And having more scoring elements with greater mobility should give me the opportunity to jump to each control zone in turns 5 and 6.

In this game I had the first turn.

Elves started their manoeuvres first. The units on the right moved towards their enemies using nearby hill for cover. Palace Guard regiment pivoted towards the centre to move against Goblin Spitters but for now they too stayed in the shadow of the hill.

The group on the left also approached cautiously. However, the combined shooting of Chariot Nobles and Silver Breeze cavalry resulted in routing first enemy regiment - a pack of vicious Mawbeasts.

Goblins seemed not to worry about the loss at all and moved forward. Trolls led the advance through the centre of the battle field, with Mincer Mob striding through the forest.

At the same time Sniffs on both flanks kept the safe distance from Elven units but were close enough to shoot at them. Unfortunately for Goblins, their arrows did little harm. Even Spitters could not do much damage either.

Elves continued the advance on the right flank, putting more pressure on Goblin units there. However this time, Storm Wind and Drakons chased the Sniffs alone while Palace Guard and Drakon Lord moved against the Sniffs.

The units on the opposite side of the battle field also advanced and occupied the hill. Drakon Riders and Drakon Lord were waiting in the second line to assist in mobile defence.

Goblins attempted to delay the Elves on the flanks with Sniffs either staying out of charge range of the enemy or trying to block the potential attacks.

The units in the middle moved forward at a double, however, and did not leave the Elves any space for withdraw.

Unfortunately, once again the shooters failed to do any significant damage to the advancing enemy forces.

Elves decided to attack now. There was no point in falling back but more importantly, there was an opportunity to inflict damage to the enemy.

Forest Shamblers, Drakon Riders and Drakon Lord all attacked Mincer Mob. In particular the flank charge of the Drakon Lord helped here and the Goblins fled the battle. Surprisingly, even for Elves who expected more protracted combat, Trolls too got hit hard enough to be destroyed in the frontal charge by Palace Guard and both Chariot Nobles.

Second regiment of Palace Guard, that initially was sent against Spitters, diverted towards the Mawbeast Pack while the Drakon Lord distracted the Goblin shooters. With Storm Wind cavalry and Drakons routing their respective targets, this area seemed to be under Elven control now.

Although the Goblins suffered a lot in the Elven attack, they were still dangerous. In particular Trombones in ranged attacks and Trolls in melee were expected to hit hard.

And yet again the shooting achieved little, as the Drakon Lord only wavered under the barrage. While stubborn Noble in the Chariot refused to yield when fighting alone against horde of Trolls.

Elves continued their attack and exploited new opportunities to deliver another powerful blow to the Goblins. Drakon Riders on the right flank joined Drakon Lord and this time Spitters were routed. Mawbeasts lost the fight against Palace Guard while second regiment of Elven elite infantry got rid of the Trombone.

The rest of the units to shoot at either remaining Sniffs or Trolls and inflicted some damage with their ranged attacks.

With only Trolls and Sniffs left from the Goblin units, there was not much they could do now apart from claiming a few Elven units. Trolls captured Elven Army Standard but Sniffs failed to do much damage. Again.


Elves decided that there should be no survivors from the enemy army and attacked one more time. The shooting took care of the already damaged Trolls and Drakon Riders routed last unit of the Goblin Army in melee.

I would like to thank Matthew for the game, especially that I know it was not an easy one for him simply due to total lack of any luck in dice rolls. He kept trying but dice simply deserted him from the start. His shooters were not able to do damage even though even the average rolls should have resulted in some damage. I really expected to lose units to his Spitters and Trombones.

I am really sorry this game was not a good experience for Matthew and I hope we will have an opportunity to play again. I am sure this time the game will be much more interesting for both of us.

Looking at the battle again I think there are a few factors, apart from lack of significant damage from the shooting, that contributed to the overall result as well.

I think Matthew could expect to hold his ground with Trolls in particular when he pushed through the centre. However, the opportunity to flank attack Mincer Mob with the Drakon Lord (the side where Big Shields do not count) helped me to get rid of that threat.

In addition, the space between the units was big enough for me to fit quite a number of my own in the frontal attack. Although I expected that Trolls would retaliate, I also hoped to have enough units left to eventually win in this area. The fact I routed the first unit on the charge was definitely a significant success.

I also noted that I could get rid of the Sniffs because of lack of inspiring presence nearby. While in the fight between Drakons and Sniffs, Drakons have good chances to prevail, having them fight for longer can also be beneficial.

Thanks for reading!
Posted by Swordmaster at 22:20