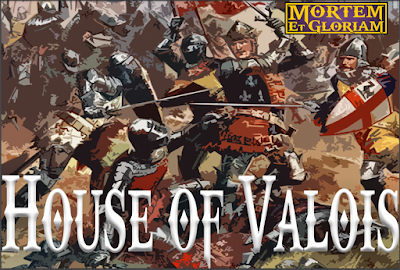 Second game of day two of Mortem et Gloriam tournament during MOAB 2019 event and I faced another Longbow heavy army, this time of English flavor. My opponent, Stephen, against whom I had a pleasure to play against before, brought the army from Edward IV English army list.

However, while Andrew's Welsh were very numerous but unprotected army, Stephen's English had more elite feel. Especially when you added these nice, little single bases of heavy armoured Men-at-Arms in Longbowmen units.

Here are the details of the army: 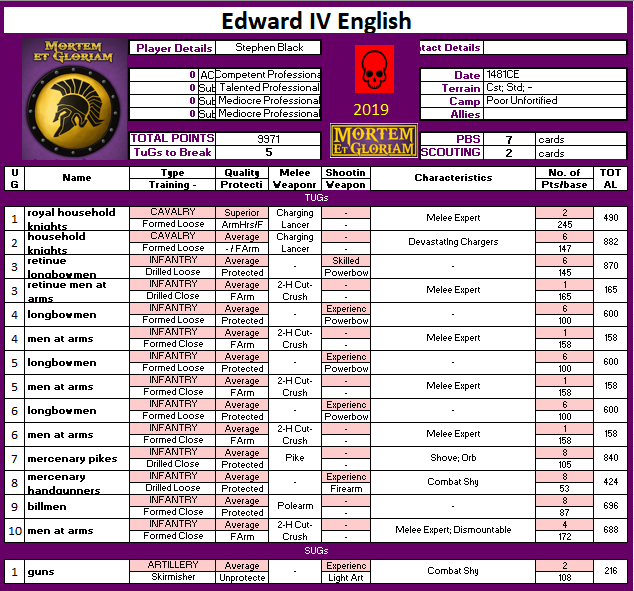 This army has the same number of units as mine but only one SuG of Artillery so the breaking point is 5. I obviously would need to, once again, advance under the storm of arrows to get into a fight. And my cavalry would have to be used very carefully while manoeuvring around the Longbowmen.

However, even with Men-at-Arms incorporated in the units of Longbowmen, I should be able to grind through them with Phalangites. The trick was to have enough time to do it and be able to avoid casualties from shooting. As well as keeping other units away and do not allow them to interfere.

I was an invader once more and we ended up with a few hills, some woods on the left flank and a rough ground in the middle of the battle field. This is important for the game as I would have to avoid it with my units with an exception of Skirmishers and Thracians.

I decided to deploy all my skirmishers in front of the rough ground with Thracians as support to help contesting the centre and perhaps eliminate one unit with shooting in the process.

Phalangites were deployed on both flanks of the skirmishers simply to see where the rest of the English army is going to be. And cavalry at the back to be able to move to the place where they are going to be the most useful. Or at least, to move where they cannot be shot at!

After seeing the deployment of the English army, I decided I need to move fast with Silver Shields and Phalangites on the right and delay on the left. Perhaps even send some cavalry in wide outflanking manoeuvre on the right flank as well, depending on how the situation develops.

Seleucids advanced mainly in the middle of the battle field and along the centre right while English responded by advancing entire battle line. Both commanders started moving the respective cavalry units towards the right flank as well.

While Seleucids continued the advance on the right, English moved their units through the centre and pushed back the skirmishers from the rough ground. Seleucids responded by sending in Thracians and some Phalangites on centre left to engage with units there that were not occupying defensive ground.

Seleucids charged but only Phalangites made it to the fight, Thracians could not maintain the pace under the heavy shooting that significantly slowed them down. What is more, nearby Men-at-Arms advanced through the ranks of Longbowmen and threatened the flank of the Phalangites.

On the right, Billmen withdrew to the top of the hill as Silver Shield were not yet close enough to charge them. In this way the elite phalangites would need to attack up the slope.

Men-at-arms defeated the Phalangites and that also helped Longbowmen to rout Thracians. English units won the battle for the control over the centre of the battle field. However, Men-at-arms were taking casualties in the fight against second phalanx. Seleucids also manoeuvred to overwhelm billmen on the hill, especially that the Knights decided that they are not willing to participate in the battle anymore.

Seeing a chance, Horse Archers moved through the rough ground in order to finish off undefended Artillery. Nearby Longbowmen turned around to prevent that but in doing so they also became vulnerable to the attacks. Companions only waited for such opportunity and quickly moved to the position for an attack.

In the meantime, Phalangites on the left defeated Men-at-Arms and stormed in to new opponent, while Silver Shields fought against Billmen for the control over the hill top.

Companions led the charge and defeated English Longbowmen. One group of Charging Lancers counter- charged against Longbowmen attempting to outflank them. While the other Charging Lancers found themselves in trouble when they were intercepted by Mercenary Pikemen.

Elsewhere, Seleucid phalangites attacked exposed flank of Billmen but they refused to break. With that last action armies disengaged before the night. No side could claim decisive victory but it seemed Seleucids suffered more casualties.

Many thanks to Stephen for a great game! It was rally close and he almost got me! I am not sure if one more turn would have been enough for him to win but it certainly looked close.

I lost 3 TuG's and 1 SuG until that moment. Silly move with Charging Lancers where I thought I can get to Handgunners while Pikes still intercepted. It didn't end well for the Lancers.

At the same time I managed to rout two TuG's and was in good position to rout two more. Unfortunately, flank charge against Billmen brought into contact only 1 file that did nothing. While I needed 1 more turn to attack Longbowmen with Companions and hopefully rout them with this rear attack.

It was thus a bloody but not decided battle with quite a few interesting turns of events. I was glad I managed to limit the impact of shooting to some extend. Not all Longbowmen were shooting at the same time. However, even then the effect was significant, as in the case of Thracians in particular. I guess it was a mistake to send them in alone, especially when they were charging against two units at the same time.

Perhaps I should have waited with the centre and force longbowmen to move out of the rough ground instead? I will need to think a bit more about this battle to come up with a better potential alternative for the deployment and action plan.

Thanks for reading!
Posted by Swordmaster at 14:48