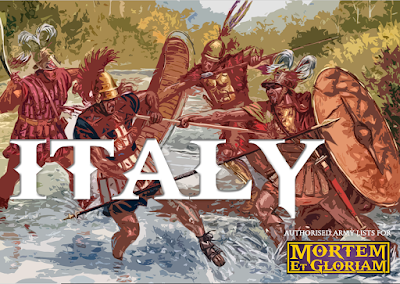 Welcome to the first battle report from the series of four that I played during the tournament WinterCon 2019. It took place in Canberra on 20-21 July. I apologise for the delay in posting about these games. I do hope, however, that I can make up for it with tales of great games against fantastic opponents!

Before I continue, I would like to dedicate the tournament reports to the player I will always consider as my Mortem et Gloriam mentor - Geoff. He helped me a lot when I was learning the game for the very first time and I was fortunate to play against him a few time since. Unfortunately, Geoff was forced to change the plans in the last possible moment and was not participating in the event. I do hope we will have another chance to play, especially that he initially planned to bring an army of Lysimachus. That would have made for a great thematic game against my Seleucids for sure. Next time!

The tournament was organised for two days with four games to be played. We were not restricted to any particular period of history. The initial match ups were made to pair armies from as close periods as possible. Other than that, we only had a limit of points for the army that was set at 10,000 points.

In the first game I was to play against Leigh, against whom I have already played on many occasions. Leigh is always happy to use different armies from different periods. This time his choice was a force of Magna Graecia. Excellent! A new faction against a great opponent, perfect way to start the tournament!

Here are the details of the composition Leigh brought to the event: 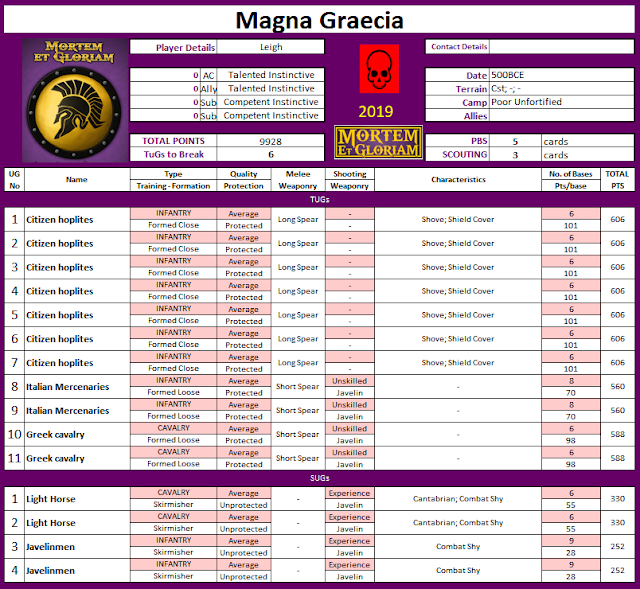 It often happens that Leigh brings the army that is numerically superior and this was not an exception. He also had a nice selection of commanders, he should not be out of cards in this game. Although all of them were instinctive, so no cards sharing.

My first impression was that I may have a chance if I could force Leigh to fight one on one as Phalangites have small advantage over Hoplites and should be able to grind through given enough time.

In order to do so, however, I needed to delay half of the army and prevent it from outflanking my smaller force.

Here are the details of the composition of the army I play with and I took to this event as well: 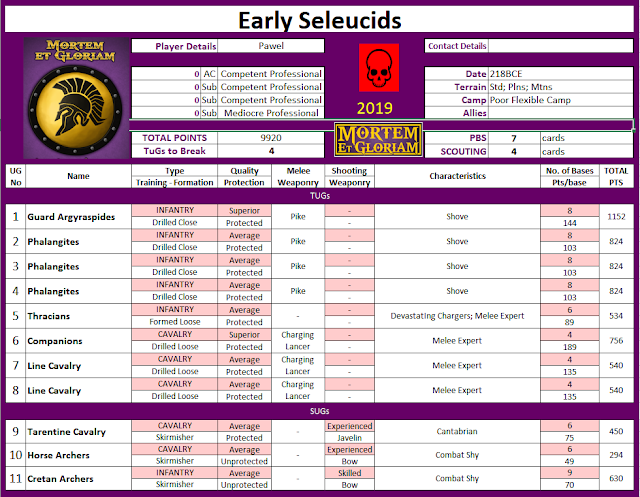 In this game we had a coast/river as a secure flank so I had a rare occasion to use my painted river pieces and I was very happy I could finally put them on the table! Both of us opted for some more terrain pieces as well. I did not fight for different terrain, I preferred to save the cards for outscouting instead.

As a result we got a few pieces of wood and rough going terrain here and there. Not much to heavily influence the shape of the battle field but enough to potentially hinder both Phalangites and Hoplites.

If I remember correctly, I managed to outscout Leigh but not by much. It didn't seem to matter because of the numerical superiority. So I decided to deploy with usual weighted flank and move along the secured flank.

I deployed one group of Phalangites on the right flank and the other closer to the centre. Light cavalry and charging Lancers were guarding my left flank.

Leigh deployed in two lines, first comprising skirmishers, clearly deployed there to harass advancing enemies. If they could inflict some damage before the clash between both battle lines, then even better.

I intended to advance with the infantry to engage any forces opposing them and slow down the enemies on my left with cavalry. I also had Charging Lancers spread a bit to be able to better exploit any gaps, if they happened to appear.

The key was to engage quickly on the right to have enough time to grind through the hoplites and open the path to the camp. While at the same time to slow down the enemy on my left to prevent it from joining the fight.

Seleucids approached the enemy according to the plan. The cavalry on the left already preparing to skirmish against enemy light horse. The main battle line of the hoplites, however, remained motionless. Only Italian mercenaries advanced on both flanks under the cover of the terrain, to slow down the Phalangites.

While Seleucid Phalanx continued the march towards the enemy, some of the hoplites also moved forward to meet them. The Italian mercenaries already clashed with Thracians on the right flank.

At the same time, the more dynamic action took place on the left flank, where Seleucid cavalry attempted to skirmish with its counterpart while simultaneously avoiding the hoplites.

Some cavalry clashes occurred on both flanks. On the left the Greek Cavalry decided to evade and lure more impetus Charging Lancers into a trap. But on the right they held their ground instead to pin their enemies for time being.

However, advancing Phalangites were now getting closer to threaten both the cavalry and Italian Mercenaries locked in combat against the Thracians.

Seleucids managed to achieve some success on the right as Silver Shiled tipped the balance, despite fighting in rough ground. Italian Mercenaries quickly lost their will to fight against two enemy units at the same time and fled.

Also Charging Lancers were winning the fight against Greek Cavalry and with Phalangites about to join the fight it would be another enemy unit routed soon.

Unfortunately, on the left flank one unit of the Lancers got caught when it was chasing away the enemy cavalry and it was clear the Seleucid horsemen were about to lose that fight.

When Phalangites and Hoplites finally clashed, the Seleucid pikemen started gaining an upper hand. However, one unit of Hoplites was overlooked by the Companions guarding the flanks and managed to charge on of the infantry blocks from the side. That broke this unit but not before another group of Phalangites, this time victorious after finishing off Greek Cavalry, joined the fight.

Unfortunately, the armies were forced to disengage at this stage and Hoplites, although sustaining heavy casualties, managed to hold the line long enough.

Many thanks to Leigh for a great game! Although it was undecided and we run out of time, it was nevertheless very entertaining.

We both tried to find the small openings in each others battle lines. It was evidenced by the fact that in turn 2 and 3 we made total of at least 20 micro moves in each of the turns! That was probably one of the reasons we did not finish the game!

I was happy with the outcome anyway (6:4 in my favour) and in particular about the move to help Thracians with Silver Shields and then Charging Lancers with Phalangites. Both resulted in routing the respective enemies.

On the other hand I moved Companions away from the opening in the centre and allowed one unit to charge the flank of my infantry. Not only I lost a unit but it did not fight in the melee phase where it could have routed wavering hoplites in front of it.

If I only moved Companions to force the charge after which the Hoplites would remain in rough ground, that would have kept them busy for a while.

I believe 1-2 more turns would simply see more units on both sides being routed. I had a chance to defeat two more TuG's of Hoplites and maybe have a go at the Camp. But even then it would have been 1 TuG too short of breaking Leigh's army.

At the same time I already let him to outflank my Phalangites and I would have not been able to stop another flank attack with possible more losses.

Another reason that slowed us down this time was the fact we had quite a few interested spectators. While they all were respectful and tried to observe the game, we inevitably got involved into some conversations. It was simply too good an opportunity to miss in order to explain a bit more about the system. Perhaps next time we will try to manage the discussions better and invite them for more chat during lunch break!

It was definitely a good start of a tournament for me in terms of enjoyment of the game. On top of that, Leigh's army looks fantastic with all the colourful shields. I wish I took more pictures, especially of the entire army!

Thanks for reading!
Posted by Swordmaster at 18:17