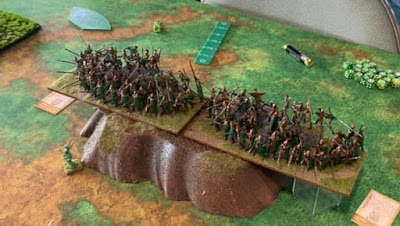 
In the third and last game of the local tournament, Capitol Bash I, I played against another army of Elves, commanded by Glen. His armies are always created with the use of Mantic models only and his Elven force was no exception.

The army itself was also designed in a completely different way as it was based around horde units and had a few units that I didn't have in mine. Here are the details of the army Glen brought to the tournament, with the exception of artifacts that I, unfortunately, cannot recall at this stage.


This is more compact army with 12 elements, 6 of them scoring and total Unit Strength of 13. It definitely has the advantage in the shooting phase so I wanted to avoid or at least minimize the effect of it. It would be difficult due to quite a number of bolt throwers that could cover substantial areas of the battle field. Fortunately, they have Reload! rule which means there will be blind spots to exploit.

Both hordes of shooters were, of course, dangerous. My intention was to avoid first turn shooting from these if possible. For example, by using terrain or simply staying out of range. If I had to move into range, the plan was to use the cover or other units as such. Forest Shamblers seemed to be good candidates as they cannot be wavered and are thus more reliable to take some damage and keep moving forward.

On the other hand I had a feeling I have the advantage in speed, maneuverability and melee, as many of my units are either faster and/or have Crushing Strength or Thunderous Charge special rules. That would be quite handy, in particular in the fights against less armored infantry hordes.

This army has thus 16 elements, 15 scoring units and total Unit Strength of 21. It is not often that I had an advantage in number of units, scoring elements and combined unit strength. I wanted to use that aspect of the match up as well!

Due to time constraints we did not change the tables and played on the same I played round 2.

The scenario for this game was Raze. We placed our tokens accordingly (Glen's are orange on the map, mine are white) and the one in the middle was marked green. It was interesting to see that we both pushed two of our own tokens to one side.

My plan was to use waves of attack on the left, where I could avoid being shot at by the Bolt Throwers. Waves would approach the enemy, even if being shot at by other units, those behind should reach the fight fresh. On top of that, Drakon Riders may have the opportunity to fly over the enemy and threaten the rear and flanks.

I decided not to vanguard on that flank, as only Drakon Riders were visible at this stage - further limiting the effectiveness of enemy ranged attacks.

With numerical superiority, I should be able to get to the tokens in turn 2, claim them and at the same time block the foe from reaching one token on my side of the battle field.

The units on the right had more difficult task as they a bit smaller combined unit strength but had a small advantage in numbers. At the very least I wanted to delay enemy units as it would buy time for the elements on the left flank to win there and go for the undefended war engines as well as claim the middle.

If that worked I should be able to control that one more vital objective to fulfill the scenario.

The Outcasts advanced cautiously but with the purpose! The brave Nobles in their Chariots moved first to draw the attention of the enemy shooters. At least one of them should survive to charge in and further disrupt the enemy plans. The rest of the formation moved behind the wall of Forest Shamblers, who protected more fragile units behind them.

On the opposite flank the cavalry and chariots stopped used the hill as a cover as well, although it did not prevent enemy shooters from seeing these units completely.

Elven infantry on both flanks moved forward as well. It was dictated by the fact that there were objectives to defend, even if the shooting accuracy suffered in the process. Combined with the fact many targets were either in the cover or even hidden, it resulted in no significant successes.

The Outcasts sent units to distract both shooting infantries on the flanks. On the left it was last minute change of plans as Shamblers were sent instead of Chariots. It was due to the fact that they had better chance of inflicting damage on tight formation.

Nearby infantry and Drakons maneuvered to better positions, being aware of the threatening presence of Awoken Guardians and Tree Herder.

On the right Chariots and Drakon Lord attacked as well. It looked like a unnecessary charge but the Outcasts had additional objective in mind. Not only they could disrupt the enemy but they could also claim the token. With the presence of the Forest Warden, they had gained temporary local superiority to do so.

As Forest Shamblers and Nobles in Chariots achieved the same on the left flank, the Outcasts now scored two out of three objectives, despite the efforts of their enemies to prevent that from happening.

The Elves had to counter charge to seize the initiative. Unfortunately, all the attacks did not bring the expected results. The Shooters on the left could not rout the Forest Shamblers, Awoken Guardians did not defeat the second group of them either.

On the right flank both Chariots and Drakon Lord survived the charges as well! Even the fact the Windborne cavalry pushed second Drakon Lord into the open, so that Bolt Throwers could shoot at him, did not bring the enemy down.

The Outcasts pushed harder on both flanks and noted some successes already. While the Shooters on the left were kept busy by the Forest Shamblers, the second group together with the Palace Guard attacked Awoken Guardians. Even these massive warriors had to concede defeat under the pressure of well coordinated attack. That allowed the Shamblers to claim the third token!

At the same time the Storm Wind Cavalry and Drakon Lord attacked their counterparts and their charge was successful too. Enemy heavy cavalry was defeated!

The Elven army kept on fighting. Both infantry hordes finally managed to defeat their opponents and Forest Shamblers and War Chariots perished. These were much needed successes for the Elven army as it attempted to regroup damaged units to tackle another counter attack.

Palace Guard units hit damaged enemy from two directions at the same time and it was enough for them to break and flee the battle. Both squadrons of the Drakon Riders attacked the Thee Herder and managed to waver the ancient warrior.

In the meantime, the Drakon Lord and Windborne cavalry took the fight to the center, with the Lord defeating enemy light cavalry while Windborne pusing one of the Bolt Throwers away from good shooting position.

All the units on the right flank attacked the infantry horde there, mainly to keep it busy and stop it from reaching any objective.

There was not much hope for Elves to win this battle so they fought now to clear the path for relatively safe retreat. Sea Guard on the right flank defeated enemy Knights and the survivors withdrew from the battle field in good order.

Many thanks for Glen for a great game! It is always a pleasure to play against you and I am glad we had an opportunity to do so!

Unfortunately we run out of time in this game, hence only 4 rounds. I guess playing without chess clocks makes you too relaxed!

Despite that it seemed that 4 turns was enough to achieve the resolution to the battle. I was happy to not only win on the left flank but also to snatch the 3rd token on the right. This is where the multiple scoring units can prevail against a single horde. Even though Glen had a sound plan in blocking the objectives, just because I had a bit more combined unit strength around (easier to achieve with noble chariots and wardens) I could still claim the objectives.

I think I was in a good position to prevent Glen from reaching his objective, as Sea Guard was already damaged and exposed flank and rear to the attack of Drakon Lords. Tree Herder was also in a bad spot so I think I had a good chance to bring him down as well.

I would like to thank Tas for organizing the event! It was good to play with real models again and local tournaments often provide opportunities to do so. I hope there will be more coming this year.

Even though there were only 7 of us total it was still great! Perhaps the timing was not suitable for other local players but it is important to keep going even with small numbers. Thanks to Michael who actually traveled from Sydney to participate, and to all who made it.

Special thanks to all my opponents, John, Nick and Glen for fantastic games. It was absolute pleasure to play against you all and I am looking forward to more opportunities to do so in the future!

Apart from the fact I really enjoyed playing with real models again, I also noticed I need to get back to painting. Fortunately, I managed to finish both units of Forest Shamblers and both Forest Wardens in March, so the army will look a bit better. I have already started working on Noble Chariots and will continue with painting for Kings of War army this year.

As to the army itself, I really felt comfortable with using it, so I would like to thank Jeff for his help and feedback on army design and many tough lessons in our games. I believe it all came together nicely this time and I ended up the day with 3 victories. It does feel good and I came back home with this:

Posted by Swordmaster at 21:35