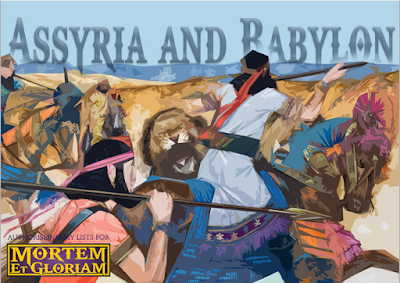 When I attended the MiniMeG event last month I met a few new players. It was one of the reasons for the tournament, to let people meet each other and spread the interest in Mortem et Gloriam system. One of these players was Leigh, against whom I played in the second round. We quickly found out that we are located in the relatively close distance from each other and decided to catch up for a casual game in the local store.

It was 3rd game with Mortem et Gloriam for both of us but we were very interested in continuing to learn the system. Hence, we both brought 7000 armies again. Mainly due to the fact that I do not have models to field a larger army. But also because we thought that learning the rules with smaller forces would help us to understand things faster.

Last time Leigh had his Franks but this time he went back in time almost 1000 years and decided to bring the army of Lydians. It was a very interesting force for me because this period of history is not well known to me. At the same time, the composition of the army itself was also very intriguing and different from Leigh's Franks as well as my Seleucids.

I was definitely outnumbered. Leigh's army needed 5 TuG's to break, not an easy task to do at all especially when you consider the fact that the break point for my force is only 3. It is mitigated by the fact that Phalangites are 8 bases strong and require more casualties to break than, for example, Spearmen. But it is still considerable advantage for Lydians.

I also noted the Leigh had an advantage in Cavalry in terms of quality, quantity and versatility. I had to counter that somehow and one of the ideas I came up with was to perform delaying actions, not committing to the fights too early. Unless I could see the enemy would not be quickly supported.

At the same time I wanted the phalanx to get into combat as quickly as possible. However, I noticed that Spearmen have Shieldwall formation and that meant pikes would not have their usual bonus.

In addition, Leigh had three commanders with the same characteristics - Competent Instinctive. I wondered if that is not the area where I should probably look for some advantages. With many unit and three commanders that also have shorter distance to issue their orders, maybe coordinating the maneuvers of the units is more difficult. What is more, it looked to me as a bit more risky in terms of available cards for maneuvers, especially that Training of the infantry in particular was not at the best level. So not only many units would require many cards but also more complicated maneuvers may be way more difficult to execute.

With that in mind I decided to use my phalanx and Thracians with both SuG's of Javelinmen to advance on secure flank, while cavalry would try to delay the enemy on the opposite side of the battle field.

Here are the details of my Army:

As in our previous game, Leigh had 4 cards vs  of mine but he had a better selection. I could choose to be Defender or Invader and decided to defend. Hence, I also chose Plains as the battle field, this time with protected flank. Thanks to better cards, Leigh army moved towards Normal terrain, hoping to have some rough going terrain features.

In the end we got one hill and two rough going pieces of the terrain, both located on the secure flank.

I managed to save good card for Scouting phase, however, and managed to out-scout the enemy and Leigh had to deploy first with 3 TuG's.

The advantage in numbers was clear when we deployed the respective armies. As mentioned earlier, I wanted to counter that by deploying Infantry on the secure, left flank and keep the cavalry as delaying force on the right side.

However, when I saw that Leigh deployed his army wide and with two lines, having his best cavalry as a reserve, I was concerned that my group on the right would not be sufficient to do what I planned.

But it was too late to change the plans and I decided to carry on. We both deployed as close to the center as possible, with first lines of both forces 6 BW distance from the middle of the battle field.

As an Invader Leigh was the first player to deal the cards and begin the battle.


Both armies advanced towards each other, however Lydians moved only their cavalry wing to close the distance with their counter parts. Perhaps it was the plan but perhaps the Lydians' commanders had a bit of a difficulty in coordinating their more numerous units.


Seleucids needed to get into combat on the left flank fast and moved the units there towards the enemy (Edit: I did not add the last move of the phalanx by mistake, please refer to the picture below for the final position of the units by the end of the turn). However, the advance was slower than planned initially as the proximity of the many enemy units made Seleucid Army Commander much more careful (Edit: Or in other words, he didn't get the good cards!)

The units on the right flank remained stationary and allowed the enemy to get into their charge range first.


Although initiative was on the side of Lydians, it was Seleucid Line Cavalry that charged first. They aimed at the Scythians, who chose to stand and shoot and with the help of nearby Phrygians skirmishers, they inflicted some damage on the attacking cavalry. That slowed the attackers down but fortunately, not enough to prevent them from reaching their enemies. The impact resulted in more casualties on both sides.

In the meantime, the armies continued their maneuvers. On the left flank, Phalagites got into attacking range and what separated them from the enemy was just a single unit of Skirmishing Archers. Thracians and Javelinmen also advanced to protect the flank of the phalanx and to get to the fight with Bithynians, who moved forward too.

Unfortunately for Seleucids, the gap in their formation encouraged some Spearmen to move forward and exploit it. Seleucids diverted one of the Cavalry units to possibly intercept the enemy before they had to attack the pahalanx.

In the continuation of the fight both cavalry units, Scythians and Line Cavalry, proceeded to inflict enough casualties to each other that both broke and retreated (Edit: I think we didn't do it correctly though. I will discuss this a bit later, in the game summary.)

Unfortunately, as in previous games, we run out of time again and had to stop the game at this stage.

Many thanks to Leigh for a great game! We hope to make it regular, fortnightly routine of playing Mortem at Gloriam so there is hope we will be able to finish the game eventually. While it is understandable that it takes time for two beginners but I wonder what else (apart from playing regularly) could we do to speed up the game. It would have been great to move to the stage were more decisive fight take place and are resolved.

Regardless of that we learned a few new things too and that was a very positive aspect of that game. For example, we had a chance to try the shooting rules when I declared the charge against Scythians. That involved nearby Phrygians who elected to Skirmish as it was safe option when Scythians decided to stand and shoot (they did not change their formation from Formed). Although the shooting inflicted only a single point of damage, one more success would have sufficiently slowed down Line Cavalry. It was very interesting in itself because it means that cavalry two bases wide can be slowed down more efficiently than that with three bases wide front, for instance.

That one point of damage was also important for the charge and following combat as it meant I lost one base on the charge already.

However, it was also the situation where we had a dilemma. Do you accumulate the damage and remove the base as soon as you have 2 points of damage? Or do you allocate the damage per each file and so you can have two files with one point of damage each, without removing a base as a result?

We also had some examples of moving through the units with Skirmishers and shuffling SuG's with TuG's. It looks like quite flexible and efficient maneuvers and I think it may be quite useful in the future games.

I was really concerned with the gap I left in between the two groups of my army. The next turn would have been very interesting because the order of actions would have been very important. For example, if Phalangites (P2) were given a chance to attack Spearmen in front of them, they would potentially be out of reach for outflanking unit (S2). If that unit charged first, however, would Line Cavalry (LC1) be able to intercept? What if Spearmen (S3) moved first to block? Or intercepted/countercharged as well? This example shows that the game has a potential to be very interesting with multitude of small decisions that contribute to the overall effect. I can't wait to get proficient enough to be able to experience more situations alike that as it would provide very interesting tactical challenges.

One more thing I wanted to focus on is the way we played melee between Scythians and Line Cavalry. Both units were down to three bases each with Line Cavalry having one point of damage. I got too excited about the melee and instead of rolling the dice file by file I picked three green dice and rolled them all together. I apologize for my rashness and many thanks to Leigh not to worry about it and carrying on with the results I got.

Which is quite interesting in itself, as despite having better dice on the Charge and in Melee, my TuG still lost this fight.

Well, that concludes my report number 3. I hope that it was still interesting read and that all these lessons we are now learning would allow us to play faster in near future. In addition, I am now trying to come up with a good idea on how to deploy and maneuver with Seleucid army. It seems to me that this type of force may be often outnumbered and due to compact pike formation it may need to be careful not to be outflanked.

Thank you very much for reading!
Posted by Swordmaster at 16:15