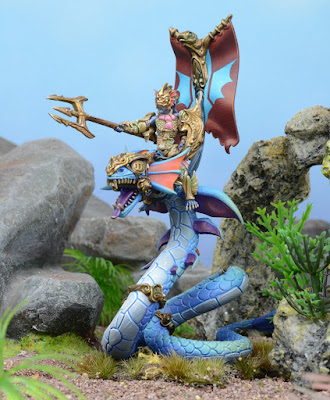 This army has 12 elements total, all of them are scoring and the combined unit strength is 22. It is quite similar to what I have. I have 2 more elements but the same number of scoring units and the unit strength is one higher.

However, Jeff's army is much different than mine. First, it is fully melee focused with no shooting or other ranged attacks at all. It is very manoeuvrable army, despite lack of fliers. It has Five nimble heroes and two more nimble monsters. It will be quite difficult to block all the potential avenues for them to exploit, especially for some flank charges.

Depth Horrors and Wyrm Riders form the bulk of the army and both types of units are quite unique. Depth Horrors seem to be fragile due to Defence 3+ and Speed 6. It means it may be quite difficult for them not to get shot and may not be able to reach the enemy in time. They are very good in the melee thanks to their Ensnare special rule that would see many attacks against them simply miss, especially when in the terrain. The fact that they are fearless and cannot be wavered, with -/18 nerve, makes them quite reliable as well.

Wyrm Raiders are faster, a bit better armoured but can be wavered. On the other hand they have Pathfinder special rule that lets them use the terrain to great advantage. If they survive the initial attack, the also have good chance to regenerate significant amount of damage. They may be quite good in the subsequent round of melee, as long as they are not being hit harder than their regenerative abilities.

In general, I should look at the opportunity to inflict some damage by shooting before inevitable melee. Some of my units are also faster so I should use that to advantage, in particular in conjunction with the effect of shooting. Every unit/hero I can eliminate this way is one less scoring unit too, Not to mention that with every unit not on the table, I may have a better chance to engineer my favourite combined charges.

Here are the details of my army list for reference.


In this game we played Push as a scenario and we got 3 tokens each. I still wanted to use the shooing to gain a bit of an advantage but at the same time, I wanted to start fighting at Jeff's side of the table. Because of that I deployed the majority of the army in the centre with the fliers guarding the flanks.

The plan was to move forward, grab the middle token and force my way through the centre.


Entire Elven army advanced towards Trident Realm forces but stayed away from the potential charges. Due to some misunderstandings in the middle of the formation, not every unit could focus on the same target. All but one unit of Silver Breeze cavalry shot at the Depth Horrors but not a single point of damage was scored.

On the other hand, a single arrow that found its mark against Wyrm Raiders caused some confusion among their ranks.


The forces of the Trident Realm advanced as well but mainly on the flanks. In both cases, Centurions guarded the rear of the formations to prevent Elven Drakons from landing behind their lines.

The Depth Horros in the centre advanced a bit but stayed in the forest for extra protection.


Despite the initial plan to use the shooting to an advantage, Elves decided to commit to the fight in the centre early. Unfortunately, not all of the units could attack the same target and they split. As a result, the damage inflicted was not sufficient to rout any Depth Horror Eternal or the Horde in the forest.

The Drakons on the right were not able to outmanoeuvre the enemies so they moved back while those on the left flew towards the centre, using Shamblers as a mobile cover.


Elven attack turned out to be premature and allowed Nereticans some good options for counter charge.

The Shamblers on the left were not able to hold against combined attack of Wyrm Raiders and Knucker. One of the Palace Guard regiment found itself being attacked in the flank as they pushed a bit too far against the Depth Horror Eternal. Now they paid the ultimate price.

Storm Wind as well exposed the flank to the attack and combined charge of Wyrm Raiders and the Centurion saw them wavered.

Things did not look good for Elves already!


Elves thus found themselves in the situation where they managed to surround some enemy forces but had to be quick in order to avoid being surrounded by the reinforcements coming from further flanks.

Drakon Riders on the left attacked the Horrors together with the Palace Guard and routed this unit. Nearby Eternal was shot down while Archers picked another token.

Drakon Riders on the left jumped over their enemies and a few lucky shots by Silver Breeze cavalry saw one of the Knuckers in the centre wavered.


The forces on the left flank turned and raced towards the centre. While Depth Horrors and Wyrm Riders fighting there managed to rout their respective opponents.


Elves had to keep pressing in order to eliminate as many enemy units as possible and to created an opportunity for the Archers to run to safety.

The attacks focused on the Wyrm Raiders in the centre but Depth Horrors in the forest were also routed.

Unfortunately for Elves, flank charge by Silver Breeze cavalry was not successful and the path to safety was blocked by the Knucker.


Trident Realm forces attacked to surround the Archers who tried to escape to the safety with all the treasure. Thanks to great mobility of the heroes in particular, three Elven units protecting the Archers were destroyed.

Elves were running out of time and units to protect the Archers. In fact, the Archers were now surrounded by enemy forces and very few other Elven units remained to help them.

Because of that, Drakon Lord attacked Depth Horror Eternal carrying the treasure in hope to capture those tokens instead.

While all Drakon Riders were now engaged in melee and Palace Guard was not in the position to help, Archers were left alone. And yet, against all odds and huge amount of damage sustained, they held!

There was still a glimmer of hope for Elves so they mustered some strength to seize the opportunity. Palace Guard routed Wyrm Raiders and Archers, fighting for their lives, wounded Knucker as well! Unfortunately, they only wavered the monster.

Drakon Riders were not efficient enough, however, and were not able to even waver the second of the knuckers.

Last but not least, both Drakon Lords kept fighting against the Depth Horror Eternals and while both inflicted some damage, it was still not enough to rout either of them.

This time the Archers were not able to hold their ground and Wyrm Raider Centurion collected all the treasure they were so bravely defending.

Depth Horror Eternal, meanwhile, disengaged and moved out of the sight of the Drakon Lord, to keep the remaining treasures out of his reach as well.

It was clear by now that all was lost for Elves. The only attempt they made was to try an shoot down the Depth Horror Eternal but the lightnings Elven Archmage summoned were not enough to achieve that goal.

To ensure the victory was theirs, Trident Realm forces defeated one of the Drakon Lords. Although both armies sustained heavy losses, Trident Realm army controlled all the treasures.

Many thanks to Jeff for a great game and congratulations on another victory! I must say I felt he is in constant control from turn 2 and I was only chasing elusive possibility to make the defeat less painful.

In short, I played (again!) on Jeff's terms and I did not use the advantages of my army against his force. Apart from the fact I think I could have deployed differently, I did not even follow my ow plan.

Despite such obvious mistake, I would like to discuss a few things that happened in the game as even in defeat like this, there is something to learn!

There was no need for me to attack so early and despite unsuccessful first turn of shooting, I should have waited. First, Depth Horrors, if attacking from the forest, would be hindered. Always a better situation for me. Instead, I attacked them in the forest, where my units were both, hindered and ensnared. Not to mention I had to choose another target for shooting.

The small but very important misalignment between the frontage of the units meant that on one hand, I was not able to get both Palace Guards and Forest Shamblers into a single Depth Horror unit. What is worse, that also left one of the regiments exposed to flank attack. That should have been obvious to me but I didn't take that into account. Again, I should have waited. Or, at least attack DH1 with both PG regiments and DH2 with Shamblers to keep them busy.

Obviously, having Depth Horror Eternal moved towards Storm Wind was a dilemma too. I decided to attack but with Ensnare and -/16 nerve, with re-roll due to Inspiring, I did not have good chances for a success. What is more, I did not block the flank of the knights with fast cavalry and as a result, they got charged by Wyrm Raiders Centurion.

After that, it was really just a race to limit the margin of defeat as, despite some small chances here and there, I was on the back foot already.

The fight in turn 4 was very interesting because there were so many different options and what's more, it was really hard to choose the right way to reform! I think I should have advanced with the Drakons though, as that, at least, would prevent flank attack from one of the knuckers. Not great chance to stay alive but still better. And perhaps keep fast cavalry close to the building and shoot at the other knucker. In this way Archers could move a bit further.

I hope this game was still interesting to read about and despite the fact I was not able to keep my Archers alive for long enough, that was quite a bloody exchange of punches.

Thanks for reading!
Posted by Swordmaster at 17:59