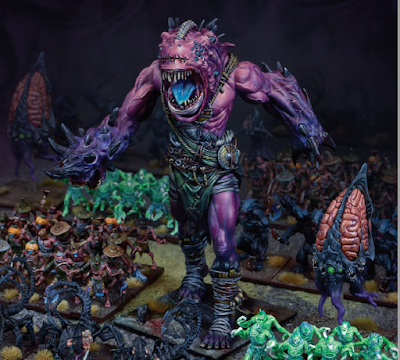 Last few months I played regular games against Jeff using Universal Battle 2.  It was a great series of battles and it seemed quite fitting that the very last game of 2018 for me would be against Jeff and his Night Stalkers army.

It was also another great opportunity to play under new Clash of Kings 2019 updated rules. There is quite a lot to consider now, I must admit, so to resist the temptation to change too many things at the same time, I followed my own rule and tried to stick to the same army I played with last time.

Jeff usually has the opposite approach and he tries to test as many things as possible. However, he kept the same faction, Night Stalkers and it seemed to me that the core of the army remained the same. It is all about those additional heroes and units he incorporates in his force that make the difference in the end. Here are the details of his army for this game:

A completely new approach, this time almost purely melee orientated. There were some upgrades for the units but I cannot recall who had what in particular. I believe one of the regiments of Scarecrows could carry Banner of Griffin and one of Dread Fiends had Lifeleech.

The first thing I noticed is the presence of three (sic!) Shadow Hulks! Oh boy! These can definitely look intimidating on their 75mm square bases. Especially if one looks as the model showcased in CoK2019 supplement! They are now a bit faster with Speed 6. They may not have Stealthy ability and their defense is 4+ but you cannot waver them and their nerve is -/20! And there are three of them! Talk about heavy punchers in the army :)

Next new addition is again a trio, Butcher Fleshrippers. It is a new type of a hero for Night Stalkers. They are nimble so that makes them almost a default choice for Jeff. :) They cannot be wavered but do not Shamble. Same as with Shadow Hulks, which I find quite interesting to see. It seems to me that more units gain that type of Nerve value without Shambling. Fleshrippers seem to be quite capable in melee with 4 attacks with Crushing Strength (2). But they also have Surge (3) ability which suddenly makes Phantoms even more dangerous!

The third quite striking difference is lack of the Void Lurker but with 2 Dread-Fiends and 5 Nimble heroes in total, Jeff had enough mobile units to make up for it. What is more he also had not 2 but 4 units of Phantoms. They are now on bigger bases but gained a bit more attacks, 12 instead of 10.

There were no allies nor shooting elements this time which made it very interesting. It was clear that this army would want to engage as quickly as possible and has means to deliver heavy punch in direct attacks. However, with quite a few mobile units it will also be seeking opportunities to outflank and generally outmaneuver the enemy once the majority of units get stuck.

And it has the ability to engage a lot of enemy units as it has no less but 17 elements and all of them are scoring! The combined unit strength of this army is 25. I think Jeff broke his own record here! My army is outnumbered (by 1 unit!), has 4 less scoring units and 6 less combined unit strength.

It just shows that Jeff's army can take a lot of beating and still have enough units to fight back, claim and contest objectives etc. It also looks like a very reliable force with many units that cannot be wavered at all. Once can count on it to keep moving forward.

This force seem to be slower but it is quite deceptive. It may not maneuver or advance as fast but with 4 flying units and 5 nimble heroes, it can intercept enemies. And simply by the virtue of the size of this army, it is going to cover entire battlefield width. So there will most likely be no safe landing spots anyway.

Here is my army list with the details for the reference.

For this game we chose another of the 2 new scenarios under CoK2019 - Plunder. You can see on the map that there are two colors for the tokens, orange is worth 2 victory points, while white is worth 1.

Not only there are 5 loot tokens but 2 of them are worthy 2 victory points than just 1. That in itself is quite an interesting dilemma on how to approach this scenario. Usually, I would try to snatch 2 out of 3 tokens and perform delaying actions with the rest of the army to keep the treasure safe. It is not so easy here because there are plenty of loot to grab to overcome that.

In theory one could aim at taking hold on two more valuable tokens and ignore the rest. It is still risky approach because one may lose or not even collect the loot and then be at a significant disadvantage. But going for all of them also poses challenges. Especially when the opposing army has more elements that can carry the treasures and is generally better equipped for war of attrition. Since loot slows units down it can also affect the maneuverability of my army.

However, I still decided to risk it. With Vanguarding Forest Shamblers I intended to create a bit of a buffer for other units to grab the loot. Then Palace Guard and Storm Wind would also move forward and collect third token. During the deployment was not yet sure if I want to get remaining two tokens on the right side of the battle field. But it was clear I could potentially go for all of it and the temptation was really strong.

I won the roll off and I rushed to claim the treasure!

One could think it was Dwarven army that was assembled to fight the Night Stalkers by the rush towards the treasure Elven units committed to! Almost all precautions where thrown away and Elves competed more with each other in who is going to get to the loot first.


Elves very quickly learned it was a trap! Night Stalkers units attacked as one, in particular on the left flank. Elven units found themselves engaged in combat with the enemy and unable to assist one another.

The main body of the Night Stalkers army was deployed on the center-right and that group advanced slowly but steadily, biding their time.


Elves realized their mistake but all they could do was to keep fighting. On the left, the Drakon Riders outflanked the enemy in hope of relieving the pressure on that side soon. Palace Guard regiments fought against their respective foes but in frontal assaults and without support they could inflict only some damage.

The same was happening in the center and Elven units were now dangerously exposed. Their shooting was quite limited in effectiveness as some of the regiments were already fighting in melee, and others had to shoot at different targets in an attempt to push them back.


Night Stalkers intensified their attacks across entire battle field. On the left flank, Phantoms animated by black magic, surged to the exposed side of the Drakon Riders and wavered them, preventing the Elves from helping their besieged companions.

Palace Guard also wavered under the pressure of the horde of Scarecrows. All Phantom units attacked and one of them destroyed War Chariots and was now threatening rear of the Elven formation. As the rest of the units were engaged to the front, there were almost no reserves to turn and repel that threat.


Elves desperately needed some successes now. However, Palace Guard failed to rout the Shadow Hulk, despite significant damage it was still too little to topple the monster.

Silver Breeze and the Mage also tried to shoot down the Phantoms from the skies but failed completely. So did the Drakon Lord and the Prince who could not land a single blow upon another flock of Phantoms.


With many Elven units badly damaged and out of position, Night Stalkers had little problems with delivering the Killing Blow. Elven army lost no less but six units in quick succession of powerful strikes.

The remaining units promptly dropped any treasure they were carrying and run away to save their lives and avoid complete annihilation.

That was the most brutal defeat I have ever suffered and it is the first time when I conceded before the end of the game. Congratulations to Jeff for a brilliant victory and masterful execution of his plan!

At the same time I apologize for not putting up a decent fight that would have made this game more interesting for him and the readers. It seems I have just discovered yet another way that does not work against him and his army! :)

I admit it was really tough to look at this battle again, it seemed to me I made every possible mistake. However, despite such decisive defeats, the best thing I can do is to learn as much as possible from this game. In fact, there is plenty to learn from it, even if majority falls under the category of "what not to do"!

First of all, I mentioned at the beginning how both armies compare in terms of number of units, scoring elements and combined unit strength. That should have already told me that one-on-one fight is not an option. It would only favor Jeff's army.

What I needed to do was to:
1.  Deploy with weighted flank formation (as one possibility) so that the disparity between number of units and combined unit strength would have been balanced on one half of the battle field.
2. Be patient and use my shooting to eliminate some of the elements. And push some of them with Windblast.
3. Keep small delaying force on the weaker flank to slow down the enemy further.

By moving fast forward I gave up my shooting and maneuverability advantages as I allowed the enemy to charge half of my army, significantly slowed down my own regiments with loot and left them spread out over entire battle line.

Additional mistakes, such as leaving the exposed flank of the Chariots or not attacking Phantoms to prevent them from flying to the side of the Drakon Riders were only speeding up the inevitable.

Although I will most likely write a 2018 Summary post later, I would like to thank all the readers for their visits and comments here, on the forum (sadly closed) and other social media. I would also like to thank Jeff for the amazing series of games and I am very happy that I could learn from him. In fact, out 32 documented battles I played this year, 12 of them were against Jeff and his armies! :)

I hope that in the next year I will come up with much better ideas on how to tackle his armies. I intend to continue my journey with MSU army as I really like this style. Jeff provided a different type of a challenge for me but I am sure there is still more for me to discover. I am now considering how to upgrade the army list with CoK2019 new options so expect some updates soon!

Posted by Swordmaster at 17:03