The good plan should start with a quick assessment of where I am at the moment with the painting progress.

Let's go through the army list I have used so far and all the elements with brief description on the painting progress:

Sea Guard Regiment - to be replaced with new, plastic models (Island of Blood Sea Guard) and multi-based. - not started yet

Palace Guard Regiment - to be replaced with new, metal models (5ed Phoenix Guard) and multi-based. - not started yet

War Chariots Regiment - the base is done, horses are painted, chariots are in WiP stage, charioteers are not yet painted - work in progress 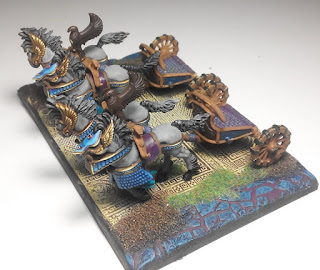 2 x Silver Breeze Troop - one unit is painted to a new color scheme and both are on separate bases. The old unit will be partially repainted to bring it to the same level and both are going to be multi-based -  work in progress

2 x Storm Wind Troop - one unit is going to be replaced with metal models (5ed Dragon Princes) and one is going to be fixed and partially repainted to bring it to the same level as whole army. Both need to be multi-based - work in progress

2 x Drakon Riders Regiment - models are converted and painted. One unit is on single-model bases but it seems both units require proper multi-basing - work in progress

Drakon Rider Lord - basic colors and unified type of base to match the rest of the army. I will use Monster March as an opportunity to paint him or at least make some progress. work in progress

Army Standards - at the moment I have 3 mounted models, all painted and I may simply rebase them to make them uniform with the rest of the army. In the future I will definitely replace them with new models. I predict they may be the last elements of the army as I would like to paint some nice banners for them and single models are a great opportunity to push the limits with painting skills too. - not started yet

It seems that pretty much entire army is a work in progress. However, it is not too bad I think. First, I am going to continue with the Chariots. I have three weeks to make some significant progress on them before Australian Clash of Kings and that is quite a realistic goal to achieve.

In the meantime, however, I decided to make new unit bases for my cavalry, i.e. four troops. It is mainly due to the fact that one unit of Silver Breeze is ready to be completed and remaining three units can be easily replaced as soon as I paint new models/update and fix the old ones. What this is going to help with, however, is that the army will have more cohesive look despite different standards of painting. And it is so much easier to move such units on the battle field! I may even make proper multi-bases for Drakon Riders in one go too.

The plan for next three months is to:
1. Finish Chariots in January
2. Work on one new unit of Storm Wind cavalry in February.
3. Work on Drakon Lord in March

Depending on the progress I will either need to finish what I started or will be able to move to painting Sea Guard.

Posted by Swordmaster at 22:40